Around 5,000 HDB flats to be built in Mount Pleasant: National Development Minister

Four existing buildings that were part of the Old Police Academy, along with the parade square, will be retained and adapted into community spaces to serve future residents.

SINGAPORE - Around 5,000 new Housing Board (HDB) flats will be built on the Old Police Academy site in the Mount Pleasant area, with the first Build-To-Order (BTO) project to be launched within the next five years.

The new public housing estate is still in the conceptual stage but its design will take inspiration from the heritage and nature in the area, said National Development Minister Desmond Lee on Tuesday (Nov 23).

The 33ha estate, around one-third the size of Bidadari, is bounded by Thomson Road and the Pan-Island Expressway (PIE). It is located close to the mature town of Toa Payoh.

Four existing buildings that were part of the Old Police Academy, along with the parade square, will be retained and adapted into community spaces to serve future residents.

The estate will have a low-rise neighbourhood centre, which is typically the heart of an estate where amenities such as retail shops are located.

It will be designed to be open and green, and will feature community spaces, said the HDB, Urban Redevelopment Authority (URA) and Singapore Land Authority (SLA) in a joint statement on Tuesday.

Residents will be served by the upcoming Mount Pleasant MRT station on the Thomson-East Coast Line, which will open in tandem with the completion of the BTO projects.

The site for the housing estate, which is on a "brownfield" site, has been earmarked for residential use in the URA's Master Plan since 1998 and will require minimal clearance of existing vegetation.

Brownfield sites are land that had previous developments on them.

There are a number of existing pre-war black and white bungalows, which are not conserved, along the nearby Mount Pleasant Road.

Because of the estate's proximity to Bukit Brown cemetery, the Central Catchment Nature Reserve and the densely forested surrounding areas, a heritage study and an Environment Impact Study (EIS) were conducted to assess the heritage and ecological value of the area, said Mr Lee. 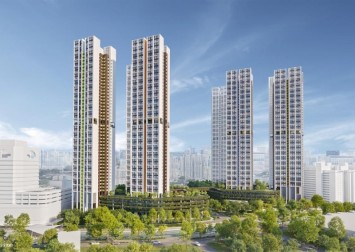 Plans for the housing estate were adjusted according to the findings and feedback received, said Mr Lee.

For instance, the original road network would have cut through the existing Kopi Sua cemetery but was instead revised to allow access via Onraet Road, which is off PIE.

"It exemplifies our evolving approach towards land planning, how we're involving the community and stakeholders more to balance different needs sensitively and further strengthening how we plan for the long term," added Mr Lee.

Part of the Singapore Polo Club will be acquired by the Government as part of the estate. The clubhouse, field and main horse stables will not be affected, said SLA.

A joint-agency workgroup will be set up to further look into how the heritage of the Old Police Academy can be preserved and incorporated into the residential parcels and the design of common spaces such as parks, before any works are carried out.

These could include proposals for new road names related to the police heritage.

The workgroup will be led by Minister of State for Home Affairs and National Development Muhammad Faishal Ibrahim.

The announcement of the new estate comes as demand for public housing remains high among Singaporeans, with application rates for BTO flats jumping by 70 per cent in 2020.