But, Bitcoin is not the only cryptocurrency available.

There’s a whole world of cryptocurrencies outside of Bitcoin and it is as wild as it gets.

Here is all you need to know about altcoins!

What are Altcoins (Alts)?

Altcoins or alts for short are simply cryptocurrencies that are not Bitcoin .

The word altcoins is a portmanteau for the words alternative coins.

So basically, any other cryptocurrency that is not Bitcoin falls under the category of altcoins.

According to leading data cryptocurrency data aggregator CoinMarketCap , there are over 8,200 altcoins that are currently listed.

If you have been following Bitcoin’s meteoric rise with the coin hitting a historic US$1 trillion market cap recently, you might be wondering; is there a need for altcoins?

Well, the answer is not too complex. Bitcoin is not without its flaws.

Typically, altcoins will attempt to make a superior version of Bitcoin or create a coin with different functionality.

When it comes to altcoins, you should know that there are different categories of altcoins and that some altcoins might fall into multiple categories.

Before you invest in altcoins, here are some cons you should be aware of.

ALSO READ: How cryptocurrencies can replace other pay options

It is not advisable to invest in something that you’re not familiar with, so I would encourage you to read beyond this article if you are interested in investing in cryptocurrencies.

Before deciding to invest in altcoin do your due diligence and research the altcoin thoroughly before investing in any altcoin.

With that out of the way, here are the top five non-Bitcoin cryptocurrencies by market capitalisation (as of Feb 20, 2021) for you to consider and do your due diligence on.

FYI: Altcoin market capitalisation = Total circulating supply of altcoins X the price of each coin (based on the exchange rate with fiat currencies like the USD).

These are also some of the more popular altcoins which are generally more stable and have a large community behind them.

ALSO READ: 5 digital currencies you can invest in besides bitcoin (And their performance in 2020)

Founded in 2015, Ethereum is one of the longest-lasting decentralised open-source blockchain platform that allows users to execute smart contracts and build applications.

In addition, you can actually create other cryptocurrencies off the Ethereum platform.

As such, Ether (ETH) is the Ethereum platform’s native token.

Unlike Bitcoin, ETH functions more as a source of energy for smart contracts.

The cryptocurrency acts as a fuel that allows smart contracts to run unlike bitcoin, which is meant to be a unit of currency on a peer-to-peer payment network.

Binance coin (BNB) was created back in July 2017 and currently functions as the in house token from the Binance cryptocurrency exchange.

Initially, the coin was operating from the Ethereum blockchain with the token ERC-20. But subsequently, the coin became the internal currency of Binance’s own Binance Chain blockchain.

In terms of functionality, you can use BNB to trade and pay transaction fees on Binance.

To incentivise users to use the token, Binance gave discounts if you use BNB.

You can also trade and exchange BNB with other coins like Bitcoin, Ethereum, Litecoin and more.

ALSO READ: A Tesla for a bitcoin: Musk drives up cryptocurrency price with $2b purchase

DOT is the native token of the Polkadot platform which was founded in 2016.

The token was created for the purpose of carrying out the key functions of the heterogeneous blockchain Polkadot platform.

The key functions of DOT include:

The protocol for this platform was developed by Dr. Gavin Wood, the co-founder of Ethereum. Essentially, the Polkadot platform was created to enable private customised side chains to link to public blockchains

Cardano was launched in 2017 by Ehtereum and BitShares co-founder Charles Hoskinson.

In other words, it functions as a social and financial operating system.

The internal token for Cardano is ADA, named after English mathematician Ada Lovelace.

ADA looks to resolve the flaws of other cryptocurrencies by focusing on interoperability.

The coin is also technologically advanced as it is able to process financial transactions in mere seconds.

Volume (how nuch traded in 24 hours): US$9 billion

Tether is a Stablecoin that is backed by real assets: i.e. fiat currencies, like the USD and Euro.

Each Tether token is pegged to the underlying fiat currency backing it with a 1:1 ratio. This means that Tether is backed 100 per cent by actual assets in the Tether platform’s reserve account.

As each Tether is pegged to real-world fiat currencies, it is not as volatile as other cryptocurrencies.

The coin allows businesses like exchanges, financial institutions and payment companies to use fiat-backed tokens on blockchains.

While not strictly an investment per se, you can earn rewards from the process of crypto staking.

How this works is that you hold a certain cryptocurrency like USDT in a crypto wallet to support a specific blockchain network’s security and operations. 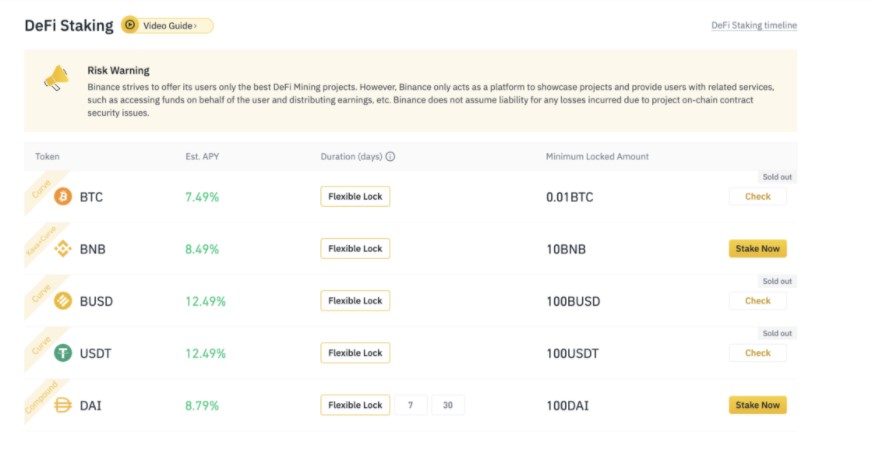 Once you have done your due diligence you might want to check out our guide to buying Bitcoin and other cryptocurrencies in Singapore !