What's it like walking away with a multimillion-dollar windfall within a span of a few months and not through winning the lottery?

Just ask the sellers of a freehold conservation shophouse unit along Kitchener Road that was recently sold for $8 million, according to a report by Edgeprop.

What's more impressive is that the previous owners had flipped the property after holding it for just five months, netting them a cool 86 per cent profit on their original purchase price.

According to Edgeprop, the property at 147 Kitchener Road, off Jalan Besar, was bought under the name of a company Pack Wan. The firm was set up in August last year, with its shareholders listed as Aaron Wan, a senior group district director at property firm Propnex, and his wife.

The couple had purchased the shophouse for $4.3 million with the intention of holding it as a long-term investment, reported Edgeprop. The ground floor of the unit is currently occupied by steamboat restaurant San Laksa, while the second floor is leased as an office space.

The 1,440 sq ft shophouse, believed to be built in the 1920s, is part of the Desker Road conservation area and features a spiral staircase from the first level leading to an open-roof terrace.

Located along a row of shophouses facing City Square Residences and City Square Mall, it is near several well-known eateries, including Pu Tien and Hillman Restaurant.

The new buyers of the shophouse, according to Edgeprop, are from Eng Teng Association, a Hakka association founded in 1916. The association was previously headquartered at Neil Road, where it owned three double-story conservation shophouses. 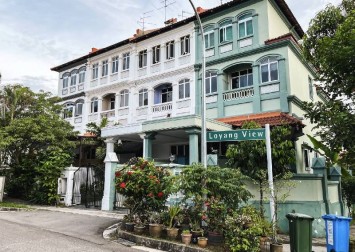 It sold the three units for a combined total of $33 million, Edgeprop reported.

When contacted by Edgeprop, Wan declined to comment on the sale.

In Singapore, shophouses are known to be architectural gems, typically located in historical districts.

In July 2022, a two-storey conservation shophouse located at Tanjong Pagar was listed at a guide price of $12 million, reported 99.co. The property sits in a 'commercial' zone with F&B operations approved on the ground floor and office use on its upper floor.

According to mortgage advisory Redbrick, conservation shophouses with 'residential' components can only be bought by Singaporeans and permanent residents (PR), with the latter having to have had PR status for at least five years and be granted approval for the purchase.