DBS signages are seen as office workers work in Singapore on Oct 8 2019.

SINGAPORE - Singapore's DBS Group warned inflation and geopolitical uncertainty may impact second-half performance too, after the wealth business of the bank suffered in the latest quarter, though profit beat estimates on rising interest rates.

"There's just too much geopolitical uncertainty right now and that's hard to translate into what does it do to the macro economy," DBS CEO Piyush Gupta told reporters on Thursday (Aug 4), citing the Russia-Ukraine war and its impact on gas and oil prices, among other factors.

"The big underlying uncertainty is inflation and what will the central banks do to control it, so that's the second order impact of that. Right now, the market is split on whether you get a deep recession or you get high inflation," Gupta said.

DBS shares fell as much as 0.9 per cent before paring losses to 0.3 per cent in late afternoon trade in a strong broader market.

The bank's first-half net interest margin improved to 1.52 per cent from 1.47 per cent, marking the first improvement in three years.

Read Also
For 4 in 10 people, income not keeping pace with inflation: DBS study 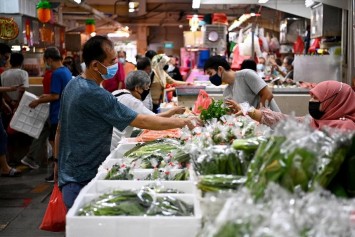 Net profit for DBS came in at $1.82 billion in April-June versus $1.7 billion a year earlier and compared with an average estimate of $1.69 billion from five analysts compiled by Refinitiv.

Singapore banks are also benefiting from a rebound in economic activity in the Asian financial hub after the government relaxed most of its Covid-19 restrictions in April.

However, a sharp pullback in global stock markets this year has battered investor sentiment, impacting the large wealth management businesses of banks such as DBS.

The bank said net fee income fell 12 per cent in the second quarter due to lower contributions from wealth management and investment banking that more than offset increases in other fee activities.

DBS said its ongoing stress tests indicated that its asset quality continues to be robust. It maintained its full-year loan growth forecast at mid-single digit per cent.