US-listed shares of Grab fell 16 per cent in early trading.

Grab and its peers recorded surging revenues during the pandemic as consumers stuck at home relied on ordering food. But as restrictions ease in most parts of Southeast Asia, consumers are heading out to grab their meals.

"What we are seeing with some of the growth trends and consumer behavior is dining out has taken place," Chief Executive Officer Anthony Tan told analysts.

"Customers want to save money... they may actually show a preference to order groceries to cook for themselves." Tan added, indicating Grab may stand to benefit from its grocery delivery business.

The company, which operates in 480 cities in eight countries in Southeast Asia, lifted the lower end of its revenue forecast for the year and said it was "laser-focused" on profitability as demand for rideshare across Southeast Asia peaks. 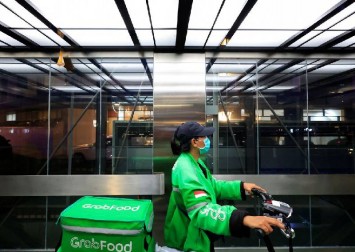 Tan said the company now plans to focus on launching new products that will help Grab focus on "profitable loyal customers" and lower the cost of serving users.

He also expects the rideshare business to rebound as economies reopen.

To cut costs, Grab said it would roll back incentives and promotions to lure drivers and users, exit unprofitable businesses such as its "dark stores" in some countries, and slow hiring.