Is Kopar @ Newton or Fourth Avenue Residences a better choice for 2-bedroom unit?

Firstly, I’d like to say I’m a big fan of the editorial and want to say thank you for all the education and information provided. As a first-time homebuyer, it’s been such a great help!

On to my question, I’m actually curious how these two developments match up to each other – namely:

To give you a little bit of context, I’m looking for a 2-bedroom home for own-stay, likely timeframe will be to stay for at least the next seven to eight years. My partner and I are avid tennis players and play regularly.

We love local food and value a nice view from the balcony. I would also like to highlight that we do have an eye on the investment portion, such that we are able to have some capital appreciation when we sell, so it would be much appreciated if you could do a comparison on this aspect too.

I hope you find my query interesting and am able to do a write-up on it. Looking forward to seeing the article and again, thank you for all that you guys do!

Thank you for writing to us and we appreciate the support so far!

I think in terms of your requirements both developments are a good fit.

Kopar @ Newton is located in District 9 and it is within proximity to two highly sought-after primary schools. It is right across the street from the Newton Food Centre for local food. While it is not as close to the MRT station as Fourth Avenue Residences, it certainly is close enough.

This is compared to Fourth Avenue Residence in District 10, with doorstep connectivity to the DTL Sixth Avenue MRT station and convenience to basic amenities.

We did a full review of both developments: Kopar @ Newton and Fourth Avenue Residences, but do note, of course, the market may have changed since then with regards to pricing.

With only 378 units, Kopar @ Newton offers a full range of condo facilities including a tennis court. It is located within walking distance to the Dual-line Newton MRT station and right across the street to the famous Newton Food Centre for local fairs.

The development is flanked along the major Bukit Timah Road, stacks facing the Newton flyover will experience road noise directly.

On a good note, it does have great road connectivity to major roads and expressways, and it is close to the city.

Do be mindful that Kopar @ Newton is a leasehold development located in an area dominated by freehold resale options. With a current average of $24xxPSF, undeniably, it is on par with the neighbouring developments.

Do also take note of the overall price quantum, as an older resale with a less efficient layout may likely cost more, while Kopar @ Newton with a squarish layout and newer facilities will be worthwhile when it comes to future exit.

At 689 sqft, it is on the smaller side but to be fair, the layout is squarish and well-laid out.

The unit opens up to the kitchen area with extra storage and countertop space on the other side. You do also get a decent-sized living and dining area.

However, the unit lacks ventilation windows in both bathrooms and kitchen area, which is a downside if you do heavy cooking.

Located in the prestigious address of Bukit Timah, with doorstep connectivity to the DTL Sixth Avenue station and basic amenities; all within walking distance.

Fourth Avenue Residences is great especially for buyers that are looking for convenience to transportation and amenities.

There is good road connectivity with access to major roads and nearby expressways. The unit mix is decent and the facilities are pretty good for a mid-sized condominium development.

Despite a triangular plot of land, the developer has managed to put in a tennis court, as one of the facilities. At an average of $24xxPSF, it is a reasonable entry price for new development in the locality.

On another note, there aren’t many schools located within a 1-km range from Fourth Avenue Residences. Hence, future buyers, especially family profiles may look at other resale options, if proximity to schools is one of their main criteria.

That being said, the one primary school within 1-km is Raffles Girls Primary School, but having just this as an option is risky!

Similar to Kopar @ Newton, the Fourth Avenue Residences 2-bedder is on the smaller side. Coming in at 689 sqft, the layout is squarish and well-laid out.

The unit opens up to a long kitchen area with a decent-sized living and dining area. The common bedroom area is also adequate, as it can accommodate a queen-sized bed minimally.

However, the unit lacks ventilation windows in both the bathrooms and kitchen area, which again is a downside if you do heavy cooking. To be fair if you are looking at a new launch unit, an enclosed kitchen with ventilation is too hard to come by.

Now that we’ve covered the developments and unit layouts, let’s look at the investment prospects in greater detail.

Fourth Avenue Residence’s units are the lowest priced full-facility condo in the vicinity since it is the only leasehold condo in the area.

We don’t expect a skyrocketing appreciation from the 2BR but instead, you should be relying on the varying stacks premiums as a safety-net/appreciation gap.

Buyers of this development will also enjoy good rentability due to the positioning of RoyalGreen next door.

Because that is a freehold project, owners there will be wanting to protect their rental yields with a higher asking rental price. This gives owners at Fourth Avenue Residences a buffer in pricing.

It’s quite simple, if you are a tenant looking in the area, would you choose the development that is connected to the MRT (cheaper) or the freehold one opposite the road (which is more expensive)?

As such, we think that the rental demand here should continue to keep prices quite stable.

Now onto Kopar At Newton: KOPAR positions itself as a full-facility condominium with an affordable quantum – the primary factors for this lower bracket pricing can be contributed to the tenure and unit size. While the closest comparable leasehold project – Amaryllis Ville, is transacting at a very similar quantum, it would be 19-years older than KOPAR at the TOP date.

We did a study into the demand of leasehold projects amidst a sea of freehold projects in the Newton vicinity – specifically with Amaryllis Ville, which saw an average of 4.82per cent resale contracts over the number of units in 2018/19.

This is despite Amaryllis Ville being an older project and it is further away from the MRT than Kopar At Newton.

Amaryllis Ville is a peek into the future for KOPAR – the demand for a leasehold project in the area can be seen from the historical transactions – with 21 units transacted in the resale market in 2021.

There are healthy resale transactions for a 311-unit development, despite being significantly older and further away from the Newton MRT.

Despite being a leasehold development, you can see that its $PSF has breached its high in 2013/14, pointing to a strong resale demand here.

Of course, this doesn’t guarantee that Kopar @ Newton would behave the same – we must be wary that as with most leasehold properties, the characteristic of lease decaying effect gives rise to the price stagnation around that period. As such, we do not advise holding on to them for more than 21 years.

From our comparison, you can see that both developments have a similar characteristic – both are positioned as leasehold developments in a sea of freehold peers.

However, both have an affordable quantum for a new full-facility condominium. Kopar @ Newton is well within the Newton MRT station and it is in proximity to ACS Junior. Fourth Avenue Residences is in district 10 and is well within the Sixth Avenue MRT station. We think that these traits would contribute greatly with its value-retention factors for both projects, despite their leasehold tenure.

Overall, it’s hard to say which one would do better given the points above. We recommend looking for a good balance between stack facing and pricing. This premium that is charged generally has the highest gap during the new launch phase only. As the project enters a resale phase, you will start to see this premium gap closing/disappear entirely.

All in all; both of the developments offer a good range of facilities especially the tennis court, one of the criteria you mentioned.

Given the choice, I’d probably pick Fourth Avenue Residences for its address with great convenience to the MRT and basic amenities.

Hence, do you prioritise convenience to MRT and amenities? Or a well-designed smaller density development?

Kopar @ Newton on the other hand is located along a major road with a flyover, traffic road noise would be an issue here. If starting a family is in the plans, the proximity to primary schools is a huge plus for Kopar @ Newton. And arguably, it does offer a better land to building ratio (70 over per cent) so facilities and layout-wise this will be much preferred.

Read Also
'I have a $3 million budget - is Reviere or The Hyde a better option?' 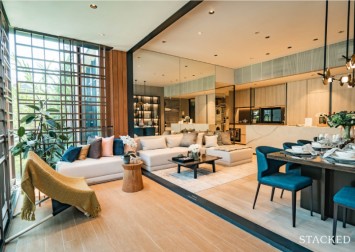 On another note, the amenities in the area may be a downside to some, as the area lacks a supermarket and basic shops.

The proximity to the Newton Food Centre with a variety of local food options is all that the area has to offer. Arguably, more amenities options could be found in Orchard, Little India, and Novena which is just an MRT ride away.

And when it comes to investment, we think that your horizon of seven to eight years is not too long to overstay the holding effects of a leasehold development – it’s well within 20 years!

This article was first published in stackedhomes.