When it comes to landed properties, the truth is that the overwhelming demand is for freehold homes. But in 2022, with interest rates, as well as private homes, soaring, that may simply be impractical or unaffordable for most buyers

So if your interest is on genuine home ownership, and not so much investment, then perhaps you should really consider leasehold landed homes. It may not have the appreciation potential of a freehold property, but given the lower prices, this could still make sense for some homebuyers. Here's where to find them, and what you need to know about them:

Where to find the cheapest leasehold landed properties in 2022:

A note on properties below $1 million

The properties that are below $1 million are in an advanced state of lease decay. Fuyong Estate, for example, has a 99-year lease that began in 1947 and has only 24 years to go.

As for Siew Lim Park, the homes in the development are of mixed tenures (i.e., some may be freehold, and some may be leasehold); the prices you see on the list are reflective of some leasehold units.

This doesn't automatically mean the properties aren't worth buying - the simple fact that we're seeing transactions in 2021/22 shows that there are interested buyers.

The landed properties in Fuyong Estate and Siew Lim Park are not just big, they're also in very convenient and accessible locations.

The houses in Fuyong Estate are right next door to the Rail Mall, and within a six-minute walk to Hillview MRT. The Siew Lim Park homes are within a 10-minute walk to the Tanah Merah interchange (East-West Line, with the interchange to Changi Airport).

For niche buyers who don't need a long lease, and have no interest in legacy value, a quantum of below $1 million isn't always a bad deal.

That said, buyers of these properties must have significant cash in hand, as banks typically don't give loans for properties that are so old. In addition, they should expect nothing in the way of resale gains, and it's improbable they will find a future buyer at this stage.

We definitely don't recommend any of these properties for the typical home buyer; but there is a market for them, albeit for highly situational scenarios.

For example, this could make sense for someone who has a specific timeline and prioritises having more living space than anything else. In this period of high rental, buying could be a cheaper option (albeit you have to pay everything up front).

Again, it's not for everyone. But there are situations where the math works out, and in those specific scenarios are where these properties could still make sense.

Which developments may be worth buying?

Among the list, a few notable developments stand out. We picked these because there's a possibility of a quantum that's just around $2 million or under, and because the projects are not too old, and still reasonably large:

Like most landed enclaves, Westville is a bit inaccessible right now; but in 2027, Gek Poh MRT station (Jurong Region Line) will be running. This station is close enough to Westville, but of course, this depends on which exact plot you are eyeing. This is also the same distance to Gek Poh Shopping Centre, an air-conditioned HDB mall; there's a Koufu food court here and a Prime Supermarket.

For other options for daily groceries, there's also a Sheng Siong located around 10 minutes from this project, next to Jalan Bahar.

For some families, the appeal of Westville is its proximity to NTU. The University is just a seven-minute drive via Jalan Bahar.

Besides, having a landed estate close to an MRT station is always an attractive proposition. The value of Westville is likely to climb, once the MRT station is up and running. Just bear in mind that, until then, Westville lacks easy public transport.

TJ has done a comprehensive tour, for those who want to get a better feel of Villa Verde.

As the name implies, this landed housing project is next to Villa Verde Park. Villa Verde is more accessible than it seems on the map: if you walk to the bus stop after Yew Tee Flyover, you can take bus 927 all the way to Yew Tee MRT station (North-South Line). From here, it's only one stop to Choa Chu Kang MRT, where you'll find Lot One mall. The MRT station is a little too far to walk daily, at about 1 km away.

As of 2022, units of 1,614 sq. ft. have transacted from $2.05 million to about $2.27 million. The sizeable units, coupled with the low (for landed) quantum, makes this a good development for extended families sharing the mortgage.

The Riverina is nestled in the very heart of a landed enclave. If you want a quiet location, without any looming towers nearby, this may be as low as the price will get.

Riverina is surprisingly accessible for being in a landed area. If you take a five-minute walk to block 601, for example, you can take bus 58 to Pasir Ris MRT (East-West Line and Cross Island Line). Pasir Ris MRT is also next to White Sands, the major mall servicing the neighbourhood.

For smaller needs, you can walk to Elias Mall at about the same time. It's your typical neighbourhood mall with the most important amenity, a Sheng Siong supermarket. You do also have a few food options, even an F45 gym.

Besides this, it's also a short walk to Pasir Ris Park and beach, which is a great spot for fresh air and the sea breeze. It's also not as crowded as other places like East Coast Park so it's better for those that want a little more privacy. Overall, The Riverina manages to capture the landed living experience, but without an extreme trade-off of convenience.

The 1,614 sq. ft. units, sizeable enough for extended families, can transact at little above the $2 million mark.

Loyang is one of the larger landed enclaves in the east and is often popular among those who like Changi Village (the village is about a nine-minute drive from here). Like most landed areas, you trade convenience for exclusivity; so you should expect to drive out for most of your needs. 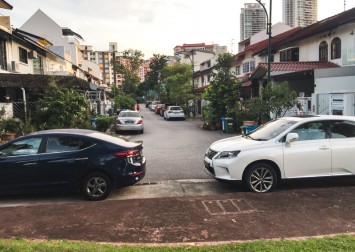 There's only one walkable mall nearby, and that's Loyang Point; this is an HDB mall that includes a Giant and a Sheng Siong. There are also fast food options here like McDonald's, Burger King, and Yoshinoya. It's about eight minutes on foot.

You'll notice Loyang Villas appears multiple times on the list and is rather popular - this is because of the low quantum relative to size. In August this year, for instance, a 1,786 sq. ft. terrace house transacted for just $1.9 million, while a 1,614 sq. ft. unit transacted at a mere $1.635 million.

With numerous transactions below the $2 million mark, units here may be affordable to some HDB upgraders; and with a lease from 1993 (70 years remaining), Loyang Villas is not as old as most affordable leasehold landed projects.

With many older leasehold landed properties, there may not be a record of transactions; or there may have been no transactions for some time. In these cases, it's best to get a property agent with on-the-ground experience in the area.