On May 27 (Wed), Singapore Exchange (SGX) announced that the contract for the license agreement it has with MSCI Inc. will not be renewed beyond February 202.

This means that aside from MSCI Singapore Index products, the license for all other MSCI derivatives and options products will not be listed on the SGX after Feb 2021.

MSCI Inc. announced that it will move its range of derivatives and options products from Singapore to Hong Kong.

After this announcement, SGX shares plunged 17.68 per cent.

The move was seen as a blow to SGX as MSCI will be signing a contract with their competitors, the Stock Exchange of Hong Kong (SEHK). 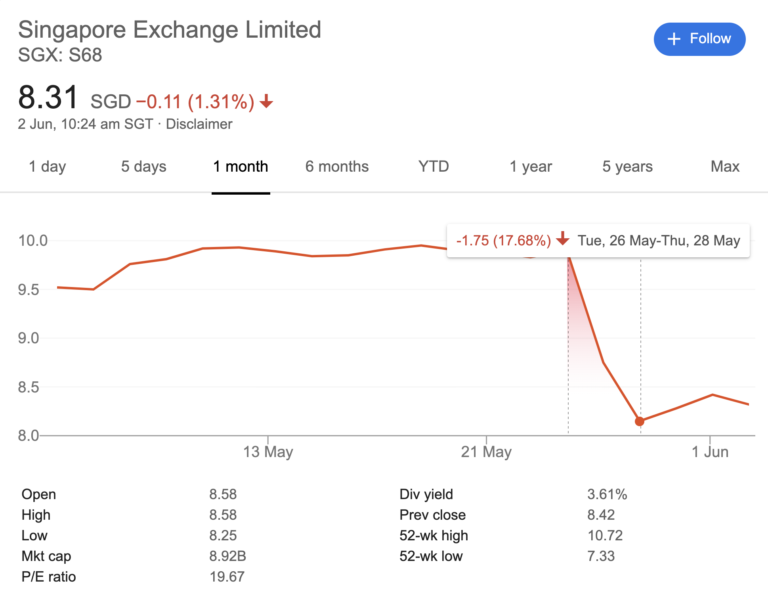 In addition, SGX revenues in 2021 will be affected as well as the MSCI contract consists of around:

For context, SGX’s derivatives accounted for about 51 per cent of its revenue in Financial Year 2019 (FY2019).

Potentially, SGX’s net operating profit after tax (NPAT) will also fall between 10 per cent to 15 per cent in FY2021.

This is based on SGX’s Pro-forma financial statements (this assumes the full 12 months are used and before any mitigating actions are taken).

FYI: Pro-forma financial statements are a method of calculating a company’s future financials based on certain projections or presumption.

However, in a briefing to analysts, SGX reiterated that they are: “Committed to a sustainable and growing dividend.”

For context, in FY2019, the total dividend paid out was 30 cents per share.

Will they be able to follow through with this? Let’s find out.

We will be evaluating SGX based on this guide on how to pick strong dividend-paying companies written by my colleague Sudhan.

Companies that are able to sustain their dividends have the following characteristics:

For the longest time, SGX has been exhibiting stable growth in both its earnings and free cash flow.

Earnings (also known as net profit) are what is left after a company pays off all its expenses, such as cost of raw materials, salaries, and taxes using its revenue.

Whereas free cash flow is cash flow from operations minus capital expenditure.

A company’s free cash flow shows how much money the firm has to dish out dividends to shareholders, buy back its shares, reinvest into its own business, or pay off debt (if any).

SGX earnings in the past five years

With a healthy 2.4 per cent annual growth rate from FY2015 to FY2019, their earnings also are growing consistently.

In addition, for the third quarter of FY2020, SGX reported a net profit of $138 million with an increase in net profit of 38 per cent from the previous quarter.

As for the future, SGX has just signed a contract for a license agreement with MSCI Singapore to list four new types of products:

These four new products will remain listed on the SGX even after February 2021.

SGX free cash flow in the past five years

For the past five FYs, SGX has managed maintained a healthy free cash flow.

In fact from FY2015 – FY2018, SGX’s free cash flow was more than the amount needed to for dividend payouts to shareholders.

But with a healthy net profit of S$138 million in the third quarter of FY2020, SGX dividends look well funded for the rest of the year.

2) Does SGX have a healthy dividend payout ratio?

The dividend payout ratio tells investors what percentage of a company’s earnings or free cash flow is paid out yearly as a dividend.

Typically healthy companies will have 80 per cent of their free cash flow as dividends.

Read Also
The SGX-MSCI split: Is this SGX's independence moment? 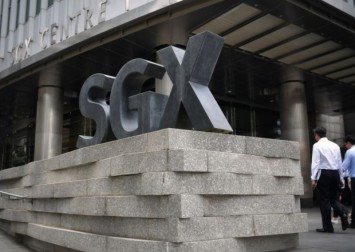 This gives companies some room to breathe in the event that the business takes a short term hit.

But based on the potential fall of 10 per cent to 15 per cent in net profit for FY2020, a committed dividend of 30 cents is still sustainable; even with the slightly dangerous payout ratio.

Let’s assume the worst-case scenario that SGX’s profit does not grow next year even after this quarter’s promising performance.

If this happens, SGX will still be able to maintain a dividend payout ratio of 97.1 per cent with a 15 per cent haircut in earnings.

3) Does SGX have a strong balance sheet?

The balance sheet reveals the financial strength of a business.

Companies with lots of cash and a low debt have the financial muscle and resilience to overcome challenges to the business.

As mentioned earlier, free cash flow can be used to pay dividends or pay off debt.

If a company doesn’t have loans to deal with, it can focus on things that matter, such as keeping shareholders happy with higher dividends or reinvesting into its business for further growth.

SGX maintains a robust balance sheet with assets primarily consisting of cash resources with a bit of investment in marketable securities.

They also have a 0 per cent debt to asset ratio.

The combination of a strong cash position and 0 per cent debt to asset ratio, mean that SGX is well poised to take on the challenge of MSCI shifting its license agreement from Singapore to Hong Kong.

Ultimately, SGX is in a strong position due to its growing earnings, healthy free cash flow, normal dividend payout ratio and robust balance sheet. These are all good signs that SGX is still a strong dividend-paying company.

The company looks set to fulfil its commitment to a sustainable growing dividend going forward despite the setback of MSCI not renewing its license agreement with SGX.

This setback will impact FY2021 earnings.

But assuming that SGX manages to sustain its earnings from FY2019 to FY2020, a 15 per cent haircut would not affect SGX’s ability to maintain dividends at 30 cents per share.