Prospects in Singapore's banking sector have improved as a rebounding economy has boosted demand for mortgages and loans, while booming markets have bolstered the wealth management business.

At the same time, benign credit costs indicate that banks have been able to manage asset quality in the face of the pandemic affecting businesses.

OCBC, Singapore's second-biggest bank, reported net profit of $1.16 billion in April-June versus $730 million a year earlier. That compared with the $1.12 billion average of four analyst estimates, Refinitiv data showed. But profit slumped 23 per cent from the first quarter.

"While the long-term trajectory of global economic recovery is positive, we remain watchful on the current operating environment in view of the recent virus resurgence and heightened safety measures in our key markets," Chief Executive Helen Wong, who took charge in April, said in a statement.

The bank's allowances for loan losses fell 69 per cent in the second quarter from a year earlier. 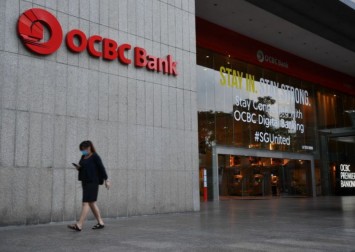 Quarterly net profit at smaller peer, United Overseas Bank, came in at S$1 billion, beating the S$948 million average of three analyst estimates, according to Refinitiv data. Profit rose 43 per cent from a year earlier as impairment charges more than halved, but profit was flat from the first quarter.

Low interest rates have crimped banks' net interest margins - a key gauge of profitability - but this has been cushioned by a rise in fee income, including wealth management fees.