Popular Queenstown, Jurong East to have BTO flats for first time in decade

The Queenstown and Jurong East projects are among the seven BTO sites, offering some 4,900 flats, that HDB will launch in August.

SINGAPORE - For the first time in almost a decade, some 610 build-to-order (BTO) flats in Queenstown, Singapore's oldest town and one of the most sought-after mature housing estates, will be launched for sale.

Another 560 BTO flats will also be launched in Jurong East, which will be getting its first new units in 10 years.

The two housing projects are among the seven BTO sites offering some 4,900 flats that will be launched by the HDB in August.

The yet-to-be-named BTO project in Queenstown will be next to Alexandra Hospital and Alexandra Fire Station in Queensway and offers three- and four-room flats.

The last BTO launch in Queenstown was the Ghim Moh Edge project in November 2012, which had 1,179 studio apartments, three-room and four-room flats.

In Jurong East, a non-mature town, some 560 two-room flexi, three-room and four-room flats will be built on a site near the upcoming Toh Guan MRT station on the Jurong Region Line.

The last BTO launch for Jurong East was Teban View in September 2011, where some 518 three- and four-room flats were released for sale.

The other estates in the upcoming August launch are Kallang/Whampoa, Tampines and Hougang.

Before this, HDB will offer about 3,800 BTO flats in Bukit Merah, Geylang, Tengah and Woodlands in May.

Since 2019, the HDB has announced new BTO sites six months in advance - compared with three months previously - although exact details of the projects are released only on the day of the sales exercise.

There are typically four BTO sale exercises a year.

The Straits Times reported in October 2019, before the Covid-19 pandemic hit, that more than 5,000 new HDB flats could be launched in Queenstown by 2027. Of these, about 2,060 could be available for sale as early as this year or next year.

But National Development Minister Desmond Lee said recently HDB will monitor the housing market closely and calibrate flat supply if required, given the economic uncertainty due to Covid-19.

Analysts expect the Queenstown flats to be very popular among buyers and will likely be oversubscribed due to its built-up amenities and central location. 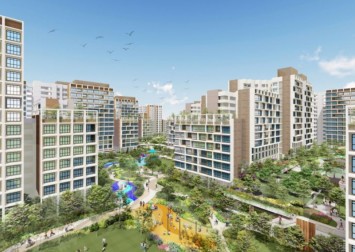 Drawing reference from the 114 four-room resale flats in Dawson Road, which is part of Queenstown, Ms Christine Sun, senior vice-president of research and analytics at OrangeTee & Tie, said they changed hands at an average price of around $840,000 last year.

"The high selling price and capital appreciation may be another reason why buyers could be attracted to the next BTO exercise in Queenstown," she said.

Accountant Toh Jun Yong, 26, is among those eyeing the Queenstown project.

"I think amenities around the estate, proximity to MRT station and the distance to the workplace in the central business district are very important," said the 26-year-old, who plans to apply for the February launch but will try for both the May and August exercises if he does not succeed in getting a ballot number.