A few months ago, we covered whether it is worth paying a premium for integrated or mixed-use condos, such as The Centris, North Park Residences and The Woodleigh Residences.

These are 99-year leasehold condos, built above amenities like a shopping mall, MRT stations and bus interchanges and retail outlets (sometimes including a cinema).

Being rare, the upside of owning an integrated condo is not only the obvious convenience (and potential future price appreciation) but a far more resilient rental yield.

To further our study of how impactful integrated condos are, we're sharing three instances of integrated condo announcements, and how these affect average PSF price performance and sales volume of other condos in the immediate vicinity of the mixed-use area.

Pasir Ris 8, a 99-year leasehold development by Allgreen Properties and Kerry Properties, is a mixed-used condominium to be located adjacent to Pasir Ris MRT station/bus interchange and the White Sands shopping mall.

In its launch weekend, the development sold 85 per cent of its 487 units, signalling potential demand for future condos integrated with upcoming MRT stations and malls.

Pasir Ris 8 is set to be completed in 2026 and Pasir Ris MRT station will join the Cross-Island Line network (direct access to Hougang, Ang Mo Kio, Punggol) by 2030.

Nearby, there are five 99-year leasehold condos which are about six to 10 minutes walk to the same interchange/MRT station.

As these condos were completed before the land parcel of Pasir Ris 8 was tendered and awarded, we're able to look at how the announcement affected their resales during this period.

For reference, the winning bid (and general plans) for the land parcel was publicised in March 2019, with the Pasir Ris 8 sales launch in July 2021.

From the chart, we can tell that sales volume for all five condos in 2019 dropped dramatically from their volumes in 2017 and 2018.

Not only that, we could see a gradual increase in volume after that - mainly due to the phased reopening and recovery plans from Covid-19 in late 2020 and throughout 2021.

The biggest drop came from NV Residences, which had a 6.65 per cent increase before, but it stabilised at about $900 PSF after a 0.63 per cent growth.

Both The Palette and Livia saw average PSF prices improve after the announcement, with respective growths of 5.76 per cent and 6.58 per cent.

Another interesting pattern was the sale volume for some of these condos in the first 10 months of 2021.

With the exception of The Palette, there was a clear slowdown in sales volume in June before a large spike in July - with D'nest seeing 14 units exchanging hands (seven of which were one-bedroom units) - the same month that Pasir Ris 8 had its launch sale.

This begs the question: Were there prospective owners selling D'nest for Pasir Ris 8?

The precinct is a joint development between Lendlease (which also developed PLQ Mall, Jem, 313 Somerset and Parkway Parade) and Abu Dhabi Investment Authority (ADIA) - a sovereign wealth fund owned by the Emirate of Abu Dhabi.

The residential component is a 99-year leasehold 429-unit condominium spread across three towers.

So it comes as no surprise that demand for Park Place Residences at PLQ would mean units are nearly sold out when it launched in March 2017.

Nearby, along Sims Avenue, there are three 99-year leasehold condos (above 100 units) prior to the PLQ tender and award announcement in April 2015.

In the years since the PLQ announcement, there have been many newer developments, such as Katong Regency, Sims Urban Oasis and TRE Residences.

When PM Lee shared news of the relocation of Paya Lebar Airbase in 2013, there seems to be some impact on two of these small- to mid-sized condos.

One of them is Sims Residences, which is the smallest among the three and the nearest to Paya Lebar MRT station.

However, when the PLQ award and development announcement was made in April 2015, it suffered a 2.57 per cent dip over the next three years - which is a reversal of the previous gain.

It's possible that potential owners and buyers were holding out for new launches near the station since the announcement.

This trend was slightly reversed for the oldest condo - Simsville - which has 522 units of two- and three-bedroom apartments. Initially, after PM Lee's 2013 announcement, its sales volume dropped drastically that year.

Similar to Sims Residences, residents and potential buyers were holding out to see what new developments were coming.

This continued till around March/April 2017 when Park Place Residences at PLQ had its launch sale (average PSF price was $1,800 PSF) - which was way above the average PSF prices of the three condos.

This was a pattern we saw earlier with D'nest during the same month and year that Pasir Ris 8 went on sale.

Were Simsville owners flipping their two- and three-bedroom apartments for Park Place Residences?

Also, Central Grove, which is the farthest of the three from Paya Lebar MRT, doesn't seem as affected by the PLQ developments as the other two.

The exception would be in 2018 when it had an uptick in sales volume more than Simsville or Sims Residences. It's probable that one reason behind this is the impending opening of PLQ Mall in 2019.

Hillion Residences: Launch effect on The Tennery, Maysprings and The Linear

The Tennery went on sale around the same year that the award win to Sim Lian was announced.

While The Tennery was new, Maysprings and The Linear were not and there was a slight dip in sales volume - most likely the wait-and-see between homeowners and buyers like what we saw with PLQ.

This may have affected the resale prospects of The Tennery after that, as most of the demand was focused on Hillion due to its transport hub and the mall.

The impasse continued until around 2016/2017, when Hillion Mall opened its doors in February 2017, a year before Hillion Residences was complete. 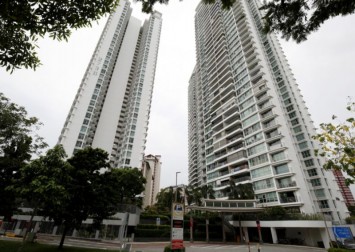 There was a slight uptick in sales volume for Maysprings (because it's directly opposite Hillion Mall), but most of the volume went to Hillion Residences.

It's also interesting to note that despite Maysprings' more convenient location, it shares similar average PSF pricing patterns with The Linear (which is a 999-year leasehold by the way) - at least until 2018.

The price and volume impact to nearby condos from an integrated condominium may not necessarily be due to the residential component itself.

More often than not, it's due to the rejuvenation of the neighbourhood from a refurbished transportation hub or shopping mall.

Some condos are resilient due to their build profile, owner/tenancy mix or proximity to certain schools, nature parks or attractions.

However, based on what we've seen, we can assume a few things: