A resale HDB maisonette in Tampines was sold for $1.013 million this month, while a five-room resale loft unit at Punggol became the first flat in the estate to breach the million dollar mark recently.

The Tampines flat spans around 1,658 sq ft, translating to a price psf of S$611. The flat is located at Blk 856D Tampines Street 82, which is across the street from Our Tampines Hub, that comprises sports facilities, retail shops, a hawker centre and a library.

It is also just a 10-minute walk from Tampines MRT, and the three malls nearby: Tampines 1, Tampines Mall and Century Square.

With the lease starting in 1995, it has 72 years and three months of remaining lease.

According to a Straits Times article, the Punggol flat was sold for $1.198 million, with a cash over valuation (COV) close to $200,000. The deal was reportedly sold two days after it was opened for viewing.

The transaction was closed by Yuna Lim from Singapore Estate Agency (SEA) who shared with 99.co that the flat was originally listed for $1.22 million.

She added that the rarity of the loft and the young age of the flat were some factors that led the buyers to pay the record price.

After some negotiations, highlighting its potential and rarity, the flat was sold at $1.198 million.

Built-in 2013, the unit is located at Punggol Sapphire along Punggol Field, which is around a seven-minute walk to Soo Teck LRT and a 10-minute walk to Punggol MRT and Waterway Point. 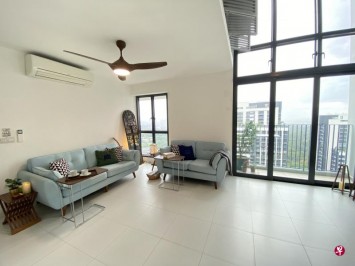 Besides breaching the million-dollar mark, both the maisonette and loft unit are double-storey HDB flats, which are highly sought after due to their rarity. This makes them very attractive to buyers, with some willing to pay a record amount for a unit.

HDB maisonettes, for instance, are only available on the resale market as HDB no longer builds them.

Likewise, only a handful of HDB loft units are available on the market. For instance, there are only 26 loft units in SkyTerrace @ Dawson, 23 in Punggol Sapphire and 14 in Treelodge@Punggol.

In fact, the most expensive HDB resale flat (for now) is a five-room loft unit at SkyTerrace @ Dawson, which sold for $1.418 million in July.

These estates are all relatively further away from the city centre, unlike centrally located estates such as Bishan, Bukit Merah and Queenstown, where million-dollar flats are usually found.

Nevertheless, it should be noted that most of these million-dollar flats are bigger than the typical flat, with most of them being rare jumbo flats and maisonettes.