Interior of the first million-dollar flat sold in Punggol.

Following recent news about HDB resale flats hitting the million-dollar mark in the suburbs, the number of million-dollar flats sold has hit a record high in September 2022.

According to Pow Ying Khuan, Head of Research at 99 Group, as of Sept 30 morning, 43 HDB resale flats have breached the million-dollar mark this month. The final tally could be higher at the end of the day when the month ends.

The previous high was in December 2021, when 36 HDB resale flats were sold for at least a million dollars.

This also means that as of writing, 275 million-dollar flats have been sold in the first nine months of this year, surpassing the record number of 259 of such flats sold in 2021.

For bank loans, the interest rate floor has been increased from 3.5 per cent to 4 per cent per annum.

For HDB loans, there will also be an interest rate floor of 3 per cent per annum.

On top of increasing the medium-term interest rate floor, two measures that target the public housing market (especially the resale market) were introduced.

The loan-to-value (LTV) ratio limit for HDB housing loans has been lowered from 85 per cent to 80 per cent.

These measures will reduce the loan amount property buyers can take, affecting their home affordability.

For instance, with the new stress-test interest rate of 3 per cent for a 25-year HDB loan, a couple with a combined income of $6,600 may no longer afford an HDB resale flat priced at $540,000 (the median resale flat price in September 2022). That is, unless they are eligible for the various resale grants, such as the Family Grant and the Enhanced CPF Housing Grant.

The LTV for HDB housing loans was previously reduced in December 2021, from 90 per cent to 85 per cent. This was also when the previous round of cooling measures were introduced, with the Additional Buyer’s Stamp Duty (ABSD) raised and the TDSR reduced.

Interestingly, it was also the same month when a record number of million-dollar flats sold was previously observed. 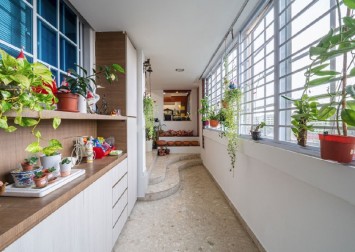 But the more unexpected measure is the 15-month wait for private residential property owners (PPOs) and ex-PPOs before they can buy a non-subsidised HDB resale flat.

This may have been a response to the increasing number of million-dollar HDB resale flats in recent months, with some of such transactions occurring in suburban estates for the first time this year, such as Yishun, Woodlands, Pasir Ris, Bukit Batok, Tampines and Punggol.

Christine Sun, Senior Vice President of Research & Analytics at OrangeTee & Tie, added that over the past month, about one to two flats have been sold for a million dollars every other day.

Will these cooling measures reduce HDB resale prices and the number of million-dollar HDB resale flats?

With the affordability of property buyers reduced, HDB flat sellers will have to readjust their selling price expectations. Those who were planning to sell their flats for at least a million dollars may also face price resistance.

Likewise, analysts expect HDB resale prices and demand to stabilise, with Sun predicting that there could be a price decrease of 2 per cent in Q4.

“Many of them paid for the resale HDB flats in cash without the need for a loan. This has an overall uplifting effect on the HDB resale market.”

The 15-month wait, in particular, will reduce demand from private homeowners who are downsizing from their private property to HDB resale flats, who may have been more willing and able to afford a million dollars for a resale flat.

Sun believes that it may cool the market for a while and slow down the pace of the price increase for bigger flats, allowing younger couples a better chance of securing such flats.