A view of the Monetary Authority of Singapore's headquarters in Singapore, on June 28, 2017.

SINGAPORE - Singapore’s central bank kept monetary policy settings unchanged on Wednesday (April 14) and said the accommodative stance was appropriate due to a benign inflation outlook and global economic uncertainties caused by the pandemic.

The Monetary Authority of Singapore (MAS) was, however, more upbeat about official 2021 growth projections while data showed the economy unexpectedly growing in the first quarter from a year earlier.

The central bank manages monetary policy through exchange rate settings, rather than interest rates, letting the local dollar rise or fall against the currencies of its main trading partners within an undisclosed band.

Barring a setback to the global recovery, Singapore’s economy is likely to exceed the upper end of the official 4–6 per cent forecast range, the MAS said. But the sectors worst hit by the crisis will continue to face significant demand shortfalls, it added.

“As core inflation is expected to stay low this year, MAS assesses that an accommodative policy stance remains appropriate,” the central bank said in its statement.

The MAS expects core inflation, its preferred price gauge in setting monetary policy, to rise only gradually for the rest of the year and come in at 0 per cent–1 per cent in 2021. However, it raised its forecast range for headline inflation to 0.5 to 1.5 per cent from −0.5 to 0.5 per cent previously.

The central bank adjusts its policy via three levers: the slope, mid-point and width of the policy band, known as the Nominal Effective Exchange Rate, or S$NEER. 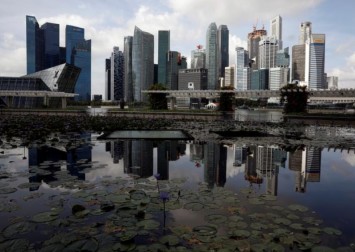 All 15 economists polled by Reuters had forecast the MAS would keep its policy unchanged.

“As such, persistent weakness in the aviation and retail and hospitality sector will hold back the recovery,” said Alex Holmes, economist at Capital Economics. He expects policy settings to remain unchanged for at least the next year.

GDP ticked up 0.2 per cent in January-March on a year-on-year basis, official data showed on Wednesday, surprising economists who had expected a 0.2 per cent decline.

Singapore, which has brought its local virus situation under control and is rolling out vaccinations, is on a gradual recovery path after its worst ever recession last year. But analysts say external demand and the reopening of international borders are key to growth.

“The domestic demand recovery is firming much stronger than what we have been expecting,” said Lee Ju Ye, an economist at Maybank Kim Eng. She said there was a small possibility the central bank may tighten at its next policy review in October if the recovery gains momentum and inflation picks up.