We analysed 87 en bloc condos. Here's what we learnt

En bloc condos were all the rage in 2017 and 2018, which isn’t surprising at all given that you could potentially make double what your property was actually worth.

With the exception of certain en bloc sagas ( Gillman Heights comes to mind), most people walk away from an en bloc sale flushed with cash and feeling on top of the world!

So naturally one of the questions that we get asked most on Stacked Homes is: How do you spot en bloc potential ?

To help answer this question, we analysed all 87 en bloc condos from 2016 till 2019 to find out are what are the similarities between all the developments and if there any characteristics in which we can glean from the information.

While we can say that there isn’t a magical formula, it is quite clear that there are some common attributes that we can learn that will result in a condo having a higher en bloc potential.

Note: Some of the data for the older condos TOP date cannot be found, and even though we can do a guesstimate, we decided it was best to exclude and leave it as unknown. 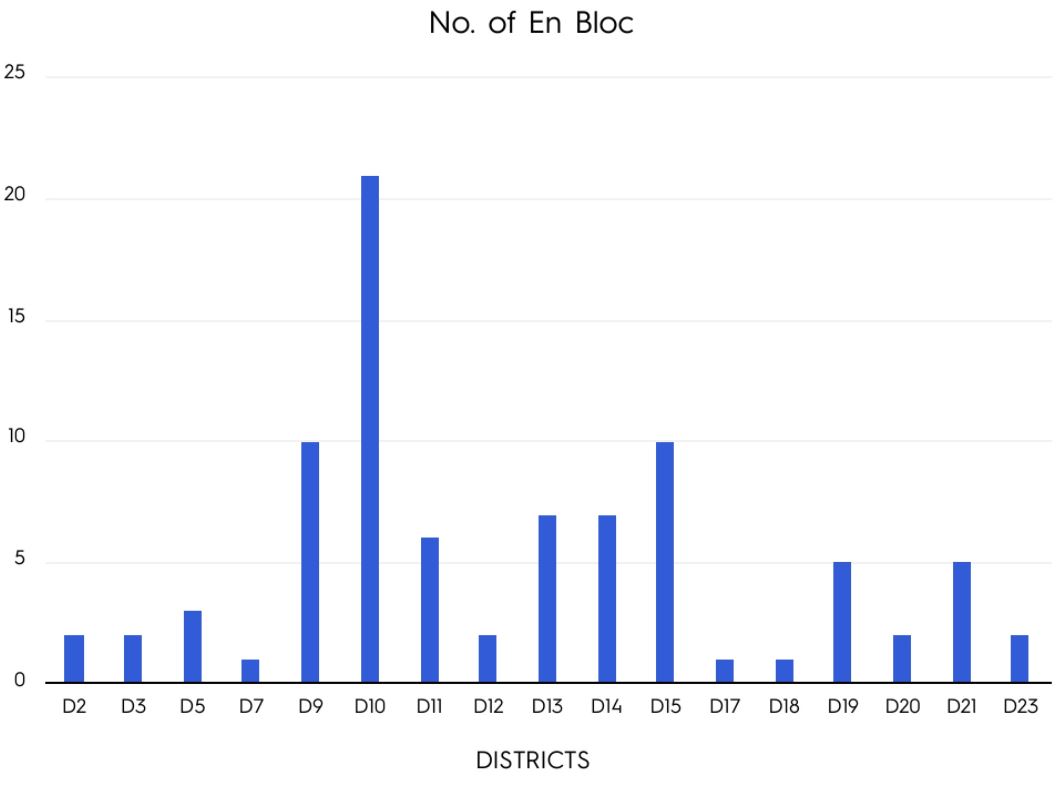 After analysing the 87 condos that have gone en bloc between 2016 to 2019, these districts were the most common in terms of location.

District 10 took home the prize of the most popular district, garnering nearly a quarter of all the en bloc condos in the timeframe. The results here are unsurprising for two reasons.

Firstly, as these are the more mature districts, they have a greater density of private developments and hence the bigger number of condominiums it would mean a bigger choice for developers to choose from.

The second reason is that as these are traditionally the premium districts, they are obviously more in demand by people as well.

Does that mean you should ignore other districts if you are looking for an en bloc potential property? Not at all.

As the popular districts get filled up with newer developments, during the next cycle developers might start looking at other districts too. 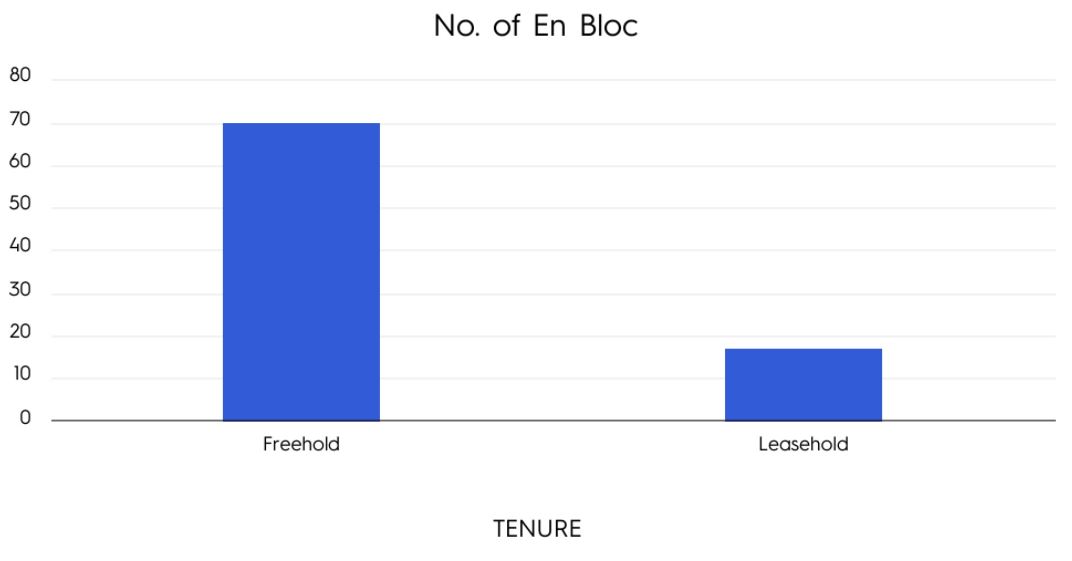 What was really surprising here was the gulf between the two, with freehold properties garnering a massive 80 per cent of all the en bloc condos so far!

One reason could be because Government Land Sales (GLS) no longer releases freehold plots, hence the need for developers to resort to collective sales to top up their freehold land bank.

On the flip side, this data does not paint the complete picture as it is segregated by individual developments.

If you were to further delve down into units, it could be a different story as many of the en bloc developments were larger leasehold sites like Eunosville and Tampines Court.

Former HUDC (Housing and Urban Development Company) estates were really popular in this en bloc cycle as they are large and comparatively cheaper in terms of land rate on a per square foot per plot ratio basis as compared to other sites.

Whereas many of the freehold sites are much smaller in size in terms of units.

The most ideal age range is 30 years and above 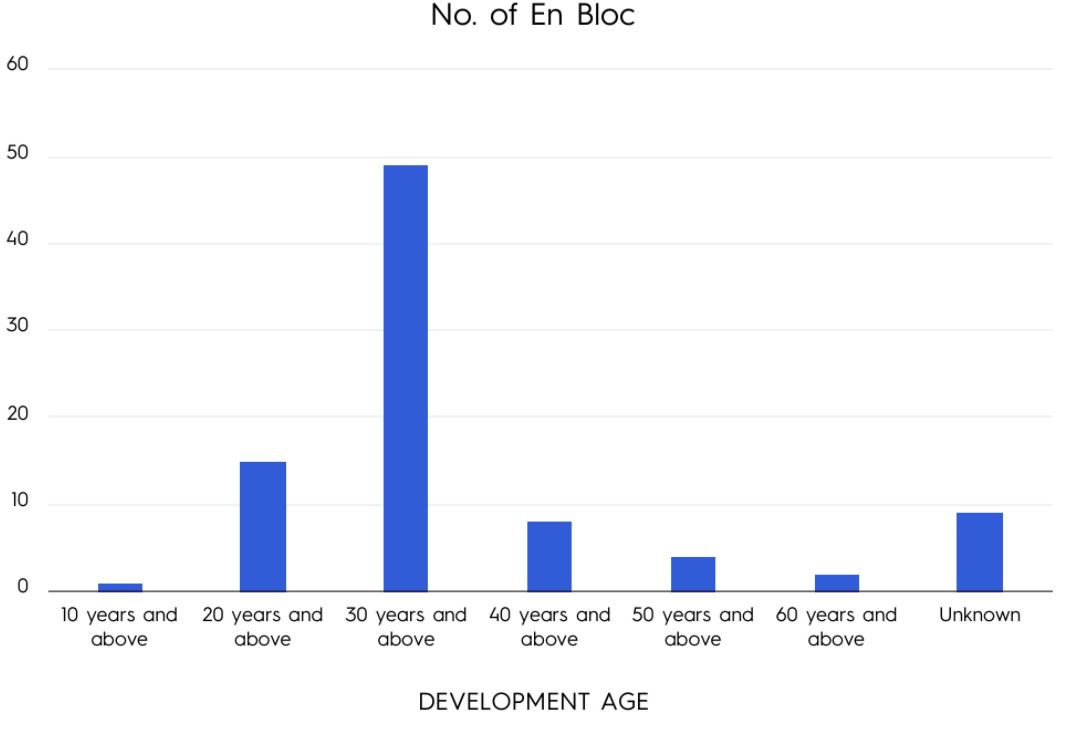 Another huge factor that you have to consider for en bloc potential is the age of the condo. From here you can see that it is very clear that for “newer” condos which we classified as 10 years and above, the chances of an en bloc happening is very slim.

In this case, only 1 managed to get through to a collective sale.

The main bulk of the en bloc condos were between 20 – 30 (17 per cent) and 30 – 40 (56 per cent) years old. Generally, you can expect the older developments to have a much higher chance of achieving an en bloc success. 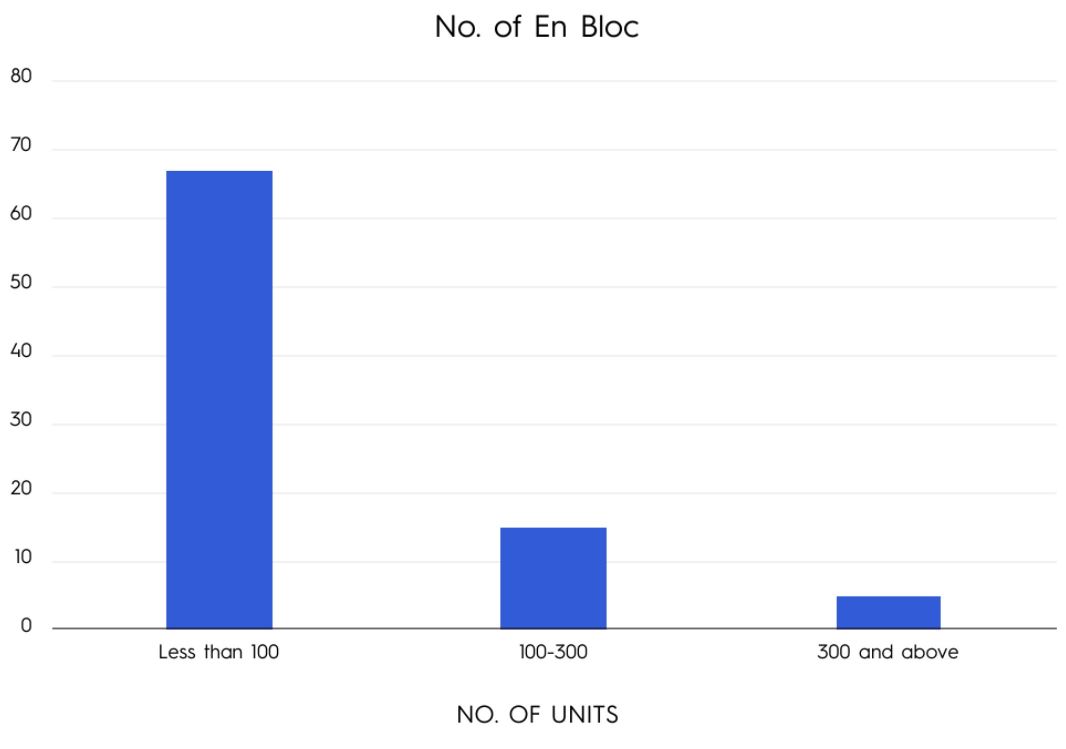 From our analysis, it is very apparent that in this en bloc cycle, most developers favoured smaller developments.

Again, this conclusion is not surprising at all given the recent ruling in 2018 which raised the development charge for developers.

Not to mention, the non-remissible 5 per cent ABSD plus remissible ABSD of 25 per cent. This has led to smaller estates being more popular because of the lower price and hence, lower risks.

Distance to MRT can be a factor, but not as much as you’d think 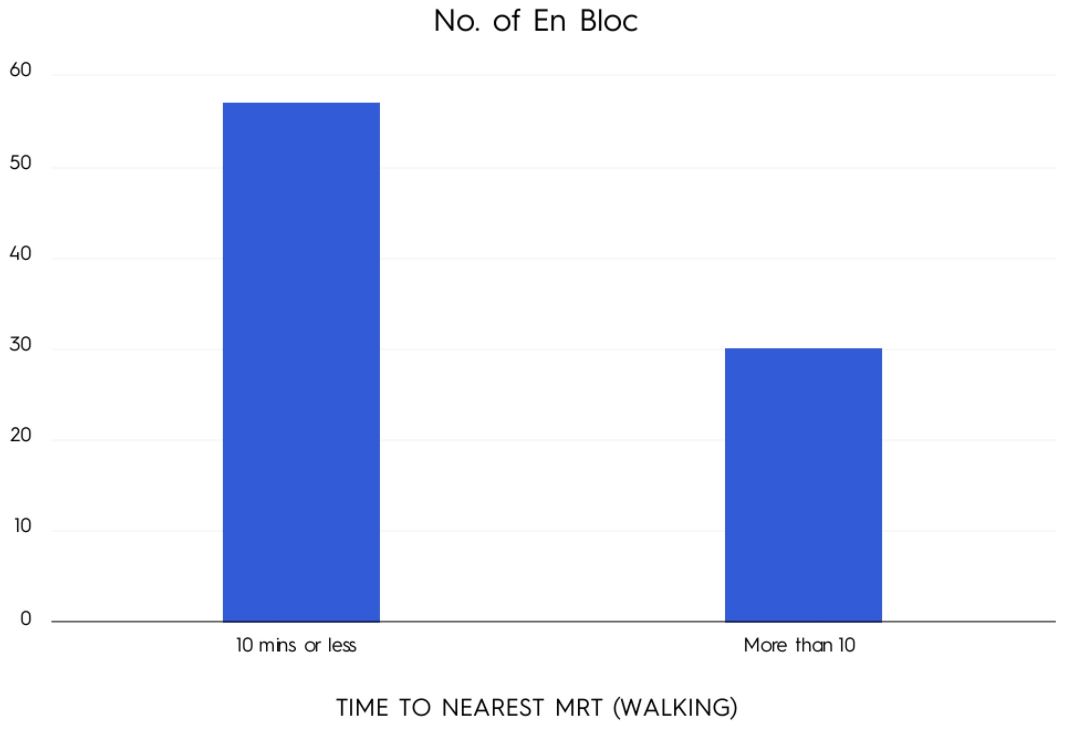 The distance to MRT is always a big factor for most people when they are considering a condo.

As a result, it wasn’t surprising that a higher proportion of developments that had gone en bloc was within a 10 minute or less walk to the MRT.

What was surprising to us was that of the 35 per cent that was more than 10 minutes walk away from the MRT, a good percentage of those were 20 minutes and above!

Which in our books it basically means the development isn’t considered to be near an MRT at all.

So is the distance to MRT important? Yes, but it really isn’t as crucial as you might think judging from the data!

So how can you use this to analyse a condo’s potential for en bloc?

Now, we really aren’t saying that there is a magical formula for determining a condo’s potential for an en bloc scenario to happen.

However, if you take all the most common attributes from the data: District 10, freehold, aged 30 years and above, less than 100 units, and 10 minutes or less walk to the MRT, you should be on the right path!