What's a 'fair price' for HDB to buy back flats constrained by the Ethnic Integration Policy?

HDB recently announced that from March 8, 2022, the Housing Board will buy back flats from owners who have difficulty selling them due to the Ethnic Integration Policy (EIP).

The EIP sets a quota on the number of households of a certain ethnicity that can live within the block or neighbourhood based on the ethnic make-up of Singapore.

While the main intention of the policy is to prevent racial enclaves, there have been cases where minority sellers are put at a disadvantage. For instance, the buyer is from an ethnicity in which the quota in the block has been maxed out, so they could not buy the flat even if the price is agreeable. This makes it harder for the seller to sell the flat.

So it is good to hear that HDB has announced this support for sellers who are constrained by the EIP.

HDB will assess the requests on a case-by-case basis, with one of the criteria being that the seller must have fulfilled the Minimum Occupation Period (MOP) and owned the flat for at least 10 years.

On top of that, the seller must show proof of their attempts to sell the flat at a reasonable price for a continuous period of time, but have been unable to sell it off due to the EIP limit.

The accepted proof includes monthly records of marketing attempts, such as listings and records of flat viewings.

As for the duration on how long the flat should be marketed, HDB currently sets it at six months. This is typically how long it takes for flat owners to sell their flat. Nevertheless, HDB noted in their press release that this can change depending on market conditions.

What is considered a reasonable price?

According to HDB, the seller can refer to recent transactions within 200m of their flat to set a reasonable selling price. They should also take into account things like floor level and orientation when determining the asking price.

One tool that sellers can use is HDB’s Transactions Within 200 Metres e-Service, which lists down the price range of units sold within the radius.

For instance, a seller is selling their five-room flat at Blk 651 Yishun Avenue 4. According to the e-Service, there were five transactions of five-room flats within the 200m radius over the last six months, with the price ranging from $480,000 to $615,000. So the seller should take reference from this range.

Another thing to note to qualify for the assistance is that the flat should be marketed at this reasonable price for at least six months. If the seller decides to sell it at $600,000, it should be listed at this price for six months.

If the flat is deemed eligible for the buyback assistance, HDB will appoint a valuer to value the flat. HDB will then determine a buyback price and make an offer. The owner will then have three months to decide if they want to take it up.

The flats bought back by HDB will be put up for sale again through the Sale of Balance Flats (SBF) or open booking.

But what would be a ‘fair price’ that HDB will buy?

The press release stated that if a flat is deemed eligible for the buyback, HDB will appoint a valuer to value the flat. These valuers are licensed by the Inland Revenue of Singapore (IRAS) and are members of the Singapore Institute of Surveyors and Valuers (SISV). 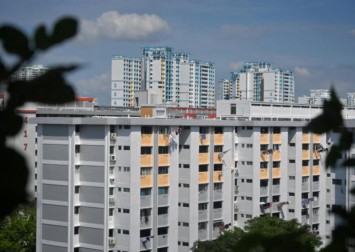 HDB adds that the flat will be assessed “based on established valuation principles”, after which HDB will determine the buyback price and make an offer.

According to Nicholas Mak, Head of Research and Consultancy at ERA, this would mean that the fair price will be based on the valuation of the flat.

Wong Siew Ying, Head of Research and Content at PropNex explained that it would depend on attributes of the individual flat as well.

“We would expect the licensed professional valuer appointed by the HDB to look at recent transactions in the area, and assess each flat based on its own attributes, including its location, floor level, home facing, flat condition, and balance lease. HDB will then determine the buyback price and make an offer for the flat at what it deems is a fair price.”

At the same time, there is still a bit of uncertainty on what this ‘fair price’ will be. As Lee Sze Teck, Senior Director (Research) at Huttons, told us, “It is difficult to guess what is a ‘fair price’ that HDB will offer.”

“The uncertainty over the ‘fair price’ may encourage owners to sell in the open market rather than wait.”