Why are Good Class Bungalows (GCBs) headed for a record high in 2021?

Property prices really have gone up across all segments, even the extreme luxury end. Good class bungalows (GCBs) have been all the rage in 2021: From $144 million worth in transactions in 48 hours (in July), to news of tech billionaires developing a penchant for these.

There’s also a good likelihood that, with Covid-19 continuing to wreak havoc, the GCB trend will be ongoing for quite a while longer. Here’s what’s happening:

GCB transaction volumes are close to the last highs of 2010

The last peak for GCBs was in 2010, when transactions totalled $1.85 billion, with around 101 transactions. By comparison, the first half of 2021 alone saw about $2.05 billion in transactions, with 68 transactions.

The highlight of the year was in July, when four GCBs transacted at around $36 million each, all within the span of 48 hours. These were:

It’s also been noticed that most buyers, in 2021, seem to be in tech-related businesses. For example, the record-breaking Nassim Road GCB was bought by the wife of Nanofilm Technologies head Shi Xu.

There doesn’t seem to be a specific reason why tech entrepreneurs are more inclined toward real estate these days. However, some theories we’ve heard are having a more stable component to their overall portfolio, cheap leveraging, and financing options like home equity loans.

(This refers to taking out a loan against the appreciated property , at a very low-interest rate).

How much have GCB prices moved since 2010?

As GCB transactions are few and far between, it’s not easy to get a sense of the overall price movement. However, we can see that Cluny and Nassim appeared to have fared best.

While prices appear to have gone up in almost all the 39 GCB areas, the rise is not proportionate.

Why the surge in Good Class Bungalows in 2021?

The reasons are somewhat similar to the overall surge in landed homes, which we covered in a previous article. But to summarise, note that the last peak for GCBs was in 2010, as recovery from the ‘08/09 financial crisis settled in. 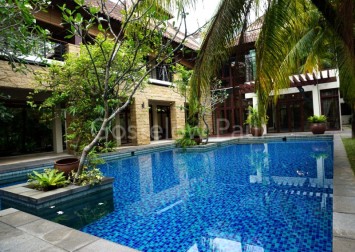 We’ve seen that investors like to consider Singapore real estate – especially freehold landed homes – as a safe haven in volatile times. With the supply of GCBs limited to just the 39 areas in Singapore, there’s seemingly little supply to meet the demand of such luxurious landed living in Singapore.

That aside, agents have noted that the surge among tech industry buyers may be related to Work From Home arrangements, and lockdown measures (worldwide, not just in Singapore).

This fuels a surge in digital entertainment and media, and owners of these companies are likely seeking a safe place to park their windfall. There have also been people making eye-popping amounts of money off crypto, and because of the lack of supply in GCBs, these have also contributed to the increasing demand.

As the ultra-rich will not have issues getting financing, the property also doesn’t “lock up” their capital as much as it would many regular buyers. For example, it’s quite common for the ultra-rich to use financing options such as home equity loans, to borrow against their properties at low rates; this allows them to quickly reinvest in other assets.

There are surprisingly good rental prospects for GCBs

It’s often said that landed homes are bad for rental yields. In terms of more run-of-the-mill landed housing, this tends to be true, with gross rental yields often at two per cent or under.

(However, the renewed demand for landed homes could bring a turnaround in Sentosa Cove’s fortunes this year).

Given that home loan rates are at record lows, averaging 1.3 per cent per annum, owners who rent out their GCBs will find it easy to cover interest and maintenance.

While GCBs are out of most budget ranges, a conventional landed home may not be as pricey as you think

We compiled some of the cheapest landed properties you can find in Singapore. For those of you who are pure home buyers, you might want to consider looking in the leasehold landed market – prices here haven’t soared as high, but many offer equal comfort in terms of lifestyle.