Two of the hottest Government Land Sales (GLS) sites have been put up for grabs – and for property buyers looking ahead, they’re definitely worth monitoring.

Whichever projects come up here are likely to be headline developments, and developers are going to fight tooth and nail this time around. Here’s why these may be the two best sites we see this year:

The Lentor Central plot is located close to Florissa Park and Lentor Drive. We’re surprised to see this plot given a GPR of 3.5, as this area has long been regarded as a landed enclave.

In fact, a check on the URA Master Plan shows that Lentor Central is the only plot in the area zoned at 3.5. Only four nearby plots are zoned at 2.8 to 3.0, with most of the others being lower density. As such, this is an area that’s quiet, and offers a good degree of privacy.

(We can’t imagine that owners of landed property, such as at Florissa Park, will be happy to have a 605-unit condo suddenly spring up nearby though! Perhaps the commercial element will make up for it).

On a similar note, any development here will have little competition. There’s only two condos which we would consider close – The Calrose, completed in 2008, is roughly 300 metres away. Thomson Grove, a much older development, which was completed in 1984, is about 220 metres away.

(Bullion Park, which we reviewed as an unusually large condo, can’t really be considered close – but it’s barely within the one-kilometre radius of this site).

As for the commercial element, we wouldn’t usually be too excited about having a few shops on the first storey. Many condos have tried this with limited draw – but we’ll make an exception in this case, because a longstanding problem in the Florissa Park / Lentor Drive area is the lack of “across-the-road” amenities. For years, residents here have had to live with the fact that there’s nothing nearby: no eateries, minimarts, retail, etc. If the development here has even a small grocery store, that will be a huge positive change.

One notable drawback, however, is that the Lentor Central site is a 99-year leasehold site. It will be surrounded by freehold land plots, which some investors may consider a drawback. Nonetheless, we’d emphasise that it has little competition anyway, as the surrounding freehold plots are mainly landed.

Overall, the Lentor Central site ticks all the right boxes: it’s close to an MRT station, it’s in a low-density area, and it will be the heart of localised amenities.

Enquiries among analysts suggest bids of between $880 to $1,050 psf are likely for this site. However, it could rise much higher, given the rare alignment of low supply in the area, plus proximity to public transport.

This site is close to the HDB development of Tampines GreenDew, along Tampines Street 62. It’s EC status, combined with being close to many HDB flats, means any project here will be an easy sell for developers.

ECs are the preferred choice among HDB upgraders, as they don’t need to pay an upfront Additional Buyers Stamp Duty (ABSD) if they choose to buy before selling their flat. In addition, the lower price point of an EC means the down payment is more likely to be covered by the sale of the flat.

As such, we see an easy transition between existing flat owners, to whatever EC lands on this plot.

Unfortunately, like most other EC sites, Tampines Street 62 is located far from any MRT station (for now). The good news is that the Tampines North station along the Cross-Island Line is scheduled to run from 2030 onwards. It’s still quite some time to go, and probably means that the first buyers wouldn’t get to enjoy this convenience immediately.

For drivers however, the location is convenient. The site straddles both Pasir Ris and Tampines – so a seven-minute drive will take you to the cluster of malls and offices in Tampines hub, while an eight-minute drive will take you to Downtown East (this is one of the largest family recreation hubs in the East, and the Wild Wild Wet water park is here).

Read Also
A complete list of 23 executive apartments: Where to find them, price, and size 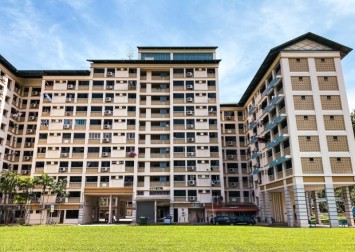 We would venture that, compared to the “ulu” locations associated with most ECs, this site is actually one of the better located ones. And like most Tampines-area condos today, it’s reasonable to assume some sort of shuttle service to Tampines Hub.

This area is admittedly quite dense, with a plot ratio of 2.5. The plot is nestled among several blocks of HDB flats. In terms of condos however, there are surprisingly few in the immediate vicinity. One of the closest would be Parc Central Residences, near Tampines Hub – but even this is about 28 minutes away. Many of the others are clustered on the other side of the TPE, such as Elias Green and NV Residences (all about 30 minutes away on foot).

The big question regarding this site is whether – a few years down the road – buyers wouldn’t still prefer properties closer to Tampines Hub. Treasure at Tampines , for instance, has over 2,200 units and is much closer to Tampines Hub (about 16 minutes on foot). When resale units become available here, or at Parc Central Residences, any project at Tampines Street 62 may look to have a weaker location.

Regardless, any project here is likely to be attractive to HDB upgraders already living in Tampines (and East-siders don’t like to move from the east). According to analysts, bids of $600 to $625 psf are expected for this site.

Be warned, prices may be higher than expected

Developers are likely to be aggressive in their bidding. This is because land banks are running down for many of them, already provoking worries of another en-bloc frenzy . Coupled with two good locations – one of them an EC to boot – land prices and the subsequent property prices could end up exceeding expectations.

It was just yesterday that the first GLS tender for 2021 closed at Farrer Park, with the site attracting a strong showing of 10 bids. CDL and MCL Land won at a top bid of $445.9 million, just 5.7 per cent higher than the second highest bid of $421.9 million. Plus, the winning bid at $1,129 psf ppr is considered to be at the upper end of estimates – thereby showing the appetite for land amongst developers in Singapore.

Also, the two sites above – Lentor Central and Tampines Street 62 – were not announced this year. They are actually remnants from the 2H 2020 GLS, which were put off due to Covid-19. As such, some developers already saw them coming, and have likely been preparing to pounce for some time.

These sites won’t be up for some time, but keep it in mind if your upgrading is still a few years away

It’s good to keep an eye on what could become available in the next few years. Tracking these new sites, along with development of the surrounding areas, will help you to shortlist properties further down the road.