Why you should not pay for your HDB with CPF

The shorter wait will be achieved by bringing forward construction and building ahead of BTO launches.

So you’ve reached one of the most important milestones in your life – buying your first home .

Before you get all excited browsing through the various property marketing platforms and going to Pinterest to look for your dream theme, let’s look at the most important step that is often overlooked – financing.

If you are one of the majority, you’re probably planning to apply for a BTO with your partner.

That’s what we were told to do anyway; fill up the online HLE (HDB loan eligibility) and VIOLA!

You can then apply for a BTO in a location that you can afford and accept, as simple as ABC right?

Many have heard of “CPF Accrued Interest OA” – but what is this exactly?

You might have seen a recent post questioning the need to return your CPF monies after selling your property. The writer...

From here you can see how you can possibly end up in a dead-end scenario if you have made the wrong financial decision.

No one wants to sell their HDB flat only to find out that they have to return hundreds of thousands of dollars plus accrued interest, and even if you don’t sell, to be faced with low unsustainable CPF monthly payouts.

Let me show you an example.

The latest surveys conducted by Robert Half and Michael Page (international recruitment agencies) indicate that in Singapore, the Median Gross Monthly Income from work, inclusive of CPF contributions of full-time employed residents is at $4,437.

A large portion of this, 23 per cent of your salary to be specific, goes towards your Ordinary Account (OA), which can also be used for your first home purchase in the future.

For the sake of simple calculations, let’s assume that both you and your partner have been working steadily for the past 5 years.

So let’s say in this hypothetical scenario you were both eyeing a BTO unit in Queenstown.

So again, here are some simple calculations:

So far so good?

Let’s assume your mortgage starts on the day you start living in your house, and that you plan to live in your BTO for 8 years.

This is what’s gonna happen – I’m gonna ignore the 38.2k that you’ve paid for 3 years before you collected the keys.

Now it’s time to sell your house. Last transacted #12 in Strathmore based on recent transactions would be around $700,000 rounded up for good measure.

Is that a good ROI for you at the end of the day?

Now let us look at another scenario, or rather, the right way to do it.

Let us use the same figures for a fair comparison, and the only thing that will change here is that the housing loan is paid in cash.

Now comes the time to sell your house.

Are you ready for it?

Now, who’s in a better position to upgrade to that swanky new 2m condo opposite their BTO that requires a 500k downpayment?

Read Also
HDB loan vs bank loan: Which one should you pick? 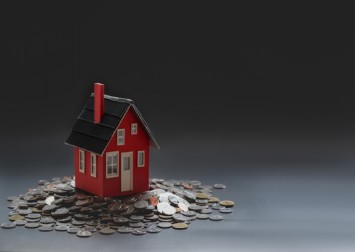 So unless you are some sort of investment guru that can grow a pile of cash at a higher rate than what you would gain from the interest in your CPF OA account, it really does not make much sense to use your CPF to pay for the mortgage.

And I think this basically applies to most Singaporeans.

The CPF accrued interest that you will have to repay to your CPF OA account can be quite big, especially because it is compounded over many years.

Perhaps this might not apply to those whose flat prices have appreciated, but HDB flats tend not to appreciate over a long period of time.

The simple truth is that the Government knows that with 80 per cent of the population living in HDB flats, they will always have this pressing need to keep public housing prices in check.

Hence, this will really only be an exception to the rule.

If you need help with calculating your sale proceeds, HDB has a useful calculator here .

*Disclaimer: Existing money in the OA was not accounted for which would have incurred a positive interest of $12,109.3 at the end of 8 years based on a balance of $115.51 a month after paying the monthly loan.

This article was first published in Stackedhomes. Disclaimer: Existing money in the OA was not accounted for which would have incurred a positive interest of $12,109.3 at the end of 8 years based on a balance of $115.51 a month after paying the monthly loan.