Flats in Woodlands Street 83 and Pasir Ris Street 13 were among those sold for more than $1 million in May.

SINGAPORE - Prices for Housing Board resale flats edged up for the 23rd consecutive month in May even as fewer units changed hands, suggesting that demand is continuing to outstrip supply, according to flash data from real estate portals 99.co and SRX on Thursday (June 9).

In May, Pasir Ris and Woodlands, a non-mature estate, lodged their first million-dollar HDB resale flats.

The most expensive HDB flat to date is a $1.4 million deal lodged last month for a five-room 113 sq m HDB flat in Henderson Road with a remaining lease of around 96 years.

A total of 30 HDB resale flats changed hands for at least $1 million in May, an increase from the 22 such deals recorded in April.

Read Also
Sold for $1.4m: Sellers of Singapore’s most expensive HDB flat may be walking away with a cool $650k profit 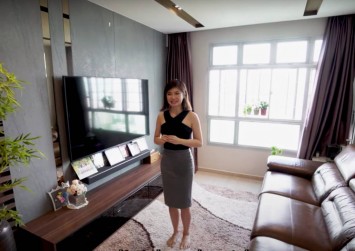 Such million-dollar flats comprise 1.4 per cent of the total resale volume in May, the data showed.

As at Thursday, there have been at least 145 million-dollar HDB flat transactions so far this year.

Compared with May last year, prices are up by 11 per cent. Price growth was observed across the board in all flat types and in both mature and non-mature estates.

However, the number of HDB flats transacted last month dropped to 2,156 units, a 5.1 per cent decrease from April's 2,273 units.

Analysts said demand may have been diverted to the attractive Build-To-Order (BTO) launches in May, which had three projects in the mature estates of Queenstown, Bukit Merah and Toa Payoh.

Last month's sales launch also offered Sale of Balance Flats which come with shorter waiting time as some were already completed while the rest were in various stages of construction.

Ms Christine Sun, senior vice-president of research and analytics at real estate firm OrangeTee & Tie, noted that more BTO flats - around 8,500 units - were launched in the first six months of this year compared with the previous five years' average of 7,000 units.

"Given the rising HDB resale prices over the past two years, cash-strapped Singaporeans may feel that they are increasingly priced out of the HDB resale market given that prices at many locations have risen by more than double digits and hit new record highs," she said.

The launch of the prime location public housing (PLH) model flats in popular mature locations, such as Bukit Merah and Rochor, have also given buyers more options, she added.

"As there will be more choice BTO flats to be released in the next few sales launches, price growth of HDB resale flats may slow down given the increased competition from the BTO market," she said.

ERA Realty head of research and consultancy Nicholas Mak said he expects the demand for resale flats to gradually moderate in the coming months as buyers regain their confidence in the delivery time of BTO flats, as HDB works to resolve the issues around the construction of new BTO flats.

"However, home buyers who are in urgent need to purchase their homes or those who do not wish to be bounded by the restrictions of PLH model for flats in popular locations would still turn to the HDB resale market," he said.

As a result, he expects resale flat prices to increase between 5 per cent and 8 per cent this year.