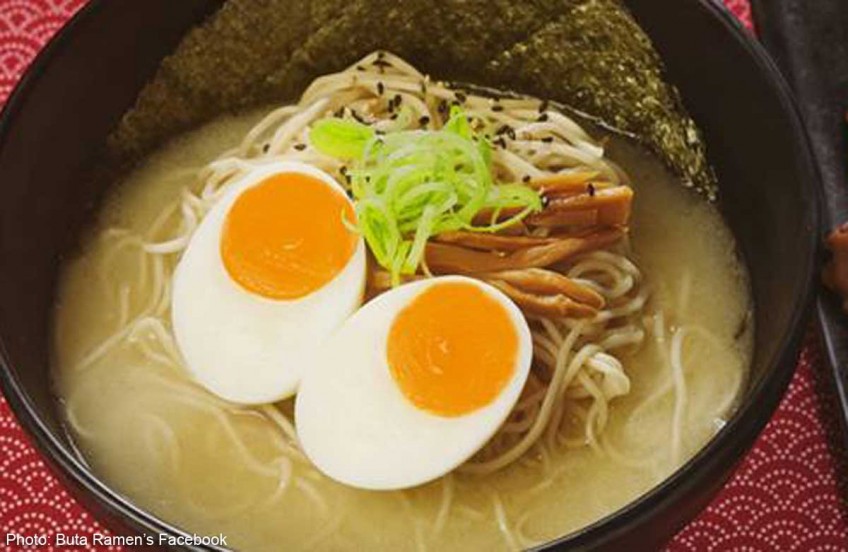 It takes a certain amount of gumption to be an entrepreneur, much more if you're delving into an industry that is completely unfamiliar.

And John Ng of MezMedia and Buta Ramen sure is one gutsy man. After successfully running his multimedia company MezMedia for a decade, which specialises in iOS apps, the serial entrepreneur went on to set up Buta Ramen, Singapore's only pork rib tonkotsu ramen restaurant last year.

"We like a new challenge. Food is another passion of ours and we are quite adept cooks," says Mr Ng, father of a seven-month-old baby girl. "We've always wanted to enter the F&B industry at some point in our lives. Plus, it made sense to diversify the business."

Talk about diversification indeed, Mezmedia was conceived as an interactive digital business in 2005 with his partner Sandy Yeo, offering a full suite of services from video, to web and mobile applications and interactive games.

And the application that Mezmedia is best known for is Bamba, its own brand of 10 educational iOS applications targeted at kids below the age of six. Boasting a plethora of interactive games for junior, Bamba now has over 2 million downloads across the US, Northern Europe and the Middle East.

"I thought that one day I would run my own design studio after years of working in one, gaining all the experience and contacts I needed to start," he recalls.

And while he did not intend to run more than one business, the go-getter recently spearheaded Buta Ramen. Combining the appeal of tender pork ribs, inspired by bak kut teh, with ramen, Buta Ramen is a Singaporean spin on the traditional Japanese staple.

He worked with his partners, one of whom has experience in the Japanese F&B line, on a rib recipe, executed sous vide-style. Initially, the founders were in the restaurant every day but now pop in to manage staff and check on the quality of food and service.

"The experience of running both are totally different," says the businessman, who explains that his hours are flexible at Mezmedia and he is able to work on tech projects from the restaurant as well. "We are still finding our feet in the F&B world."

With its capital and labour intensive nature and low margin for error, the F&B industry is one of the toughest to survive in. Nevertheless, the businessman remains undaunted. Having invested a low six-figure sum into Buta Ramen, the owners are close to recouping their start-up capital.

"These are the de facto industry problems. We just have to find innovative ways around it, like any business," says Mr Ng.

"We have had many positive reviews for our ramen and have been profitable since the day we started. So we've got a great start."

A true tech guy indeed, he also quips about the possibility of using software to tackle some problems in the industry. "I do have some ideas floating in my head, but nothing concrete for now."

This article was first published on May 23, 2015.
Get The Business Times for more stories.