The Louvre has dedicated a new art tour to Beyonce and Jay-Z after pop's biggest power couple shot the video for their latest hit in the Paris museum.

The R'n'B stars' hit song "Apes**t" -- which used some of the museum's greatest masterpieces as backdrops -- has been viewed 56 million times on YouTube alone since it was released a fortnight ago.

Now the Louvre, which already has a tour based on the US rapper will.i.am's hit "Smile Mona Lisa", has created another based on the Carters' night in the museum.

It follows the video through 17 paintings and sculptures which feature in the six-minute clip, going from the monumental white Greek marble "Nike of Samothrace" to Marie Benoist's "Portrait of a Negress".

The choice of works which they used or posed in front of has been taken as a celebration of black bodies and empowerment in an institution which was built on the spoils of conquest and imperialism.

"Portrait of a Negress" was painted in 1800, six years after revolutionary France had abolished slavery in its Caribbean colonies only for Napoleon to reinstate it two years later.

But perhaps the most striking image is of Beyonce at the centre of a line of black dancers in front of David's "The Coronation of Napoleon I and the Crowning of the Empress Josephine" singing, "I can't believe we made it.." 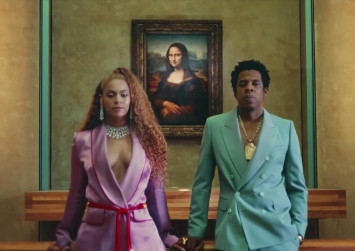 The song is part of their surprise joint album, "Everything is Love" -- their first -- which they released under their real family name, The Carters.

It is a celebration of African-American identity and their marriage, whose problems and Jay-Z's infidelity Beyonce detailed in her 2016 album "Lemonade".

The self-guided 90-minute tour is for now only available in French at https://www.louvre.fr/routes/jay-z-et-beyonce-au-louvre but other languages are likely to follow.

The guide describes in detail each artwork in the video but stops short of explaining what it is used to signify in the video.

But Professor James Smalls, of the University of Maryland, described the video -- directed by Ricky Saiz, who also made the Beyonce clip "Yonce" -- as "arresting... I would even go so far as to say brilliant."

He argued that it "appropriates, exploits, and reinterprets Western paintings and sculptures as a way to chart and celebrate the Carters' success, and black bodies in an artistic canon inextricably linked to histories of colonialism.

"The video is an unapologetic visual and sonic manifesto about spaces, power, and control," he wrote in Frieze magazine.

"It is all about bodies -- an orchestrated contrast of energetically writhing and animated black physiques set against frozen white forms of the past."

The Louvre has refused to say how much the couple paid to shoot their video in front of the "Mona Lisa", the "Venus de Milo" and Gericault's "The Raft of the Medusa", in which Jay-Z poses looking up at the muscled black hero at the apex of the canvas.

The Louvre's director Jean-Luc Martinez has said that he wants to make the museum's vast collection "more readable" for a wide, global public.

Last year more than two-thirds of its 8.1 million visitors were foreigners, half of whom were under 30.