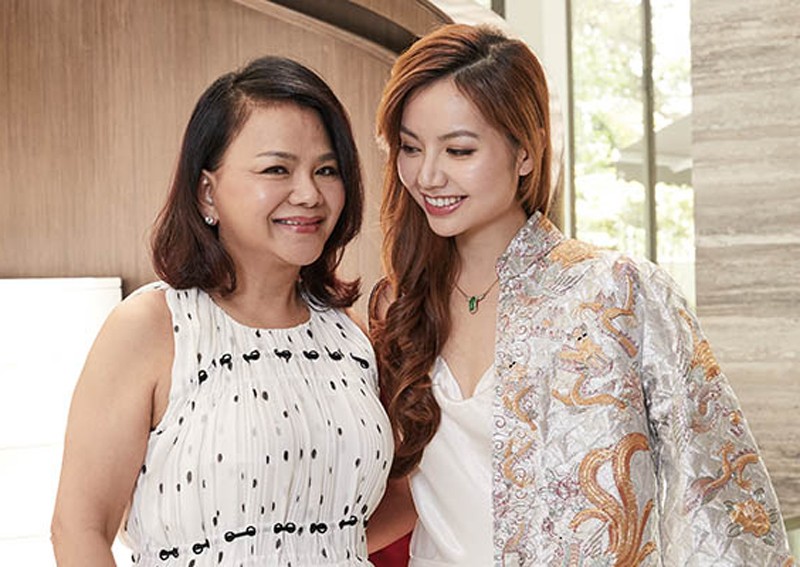 Jean Yip's father did not like any of the beauty mogul's boyfriends when she was younger, but all that changed when she brought Mervin Wee home.

"He was immediately taken with Mervin and said he had a kind face," Jean recalls. "He told me that this was the man I should marry."

Having met in 1975, the pair dated for 10 years before tying the knot and have now been hitched for over three decades, sharing lessons of triumph and hardship - as well as tokens of love - along the way.

"The simplest piece of jewellery I own, but one of my most precious possessions, is this jade necklace that Mervin bought for me before he left to hone his hairdressing skills in London," she says.

"It cost about $5,000 and he had to sell his car and eat bak kwa and pork floss for three months just so he could afford it. It really made me worry about how he was able to take care of himself while he was overseas."

Mervin's generous trait is something their daughter, Rachel, has inherited too, which is why Jean is happy to pass on this priceless heirloom to her second child. Rachel, in turn, is absolutely delighted at being able to hold onto a part of her parents' love.

"Even though this jade necklace is just a material thing, what it represents makes this piece mean so much more to me," she says.

"I'm honoured to receive something that showcases my father's selflessness in his love for my mum. With this jade necklace, I'll always have that memory to cherish and pass on to my children, and their children after that, so they can hopefully develop that trait as well."

Jean's second-most treasured piece is a traditional hand-woven kua, or Chinese wedding outfit, embellished with silver thread. "I remember my grandmother saying that for a marriage to be free of problems, the kua must be chosen carefully.

It was a well-made purchase as several family members have worn it on their wedding day, including Cheryl, the couple's eldest daughter. Rachel, who is getting married next year, also plans to don the kua on her big day.

"Young people tend to like modern and fashionable things but when it comes to marriage, my parents rooted my upbringing in tradition, so this kua symbolises the sanctity of marriage for me," she explains.

"Even though it's heavy with elaborate embroidery and sequins, I want to wear it beyond the tea ceremony and hopefully for the entire wedding celebration."

This article was first published in The Singapore Women's Weekly