The 35-year-old model - who has sons Flynn, seven, and six-month-old Hart - has revealed she is content with her post-pregnancy figure.

She confessed: "I've got a mum bod and it's fine!"

The Australian beauty - who married her second husband, the billionaire businessman Evan Spiegel, in 2017 - thinks it's important that women don't feel under pressure to lose their baby weight in sudden fashion.

Speaking to Marie Claire Australia, Miranda shared: "It's really important as women that we're gentle with ourselves and don't feel like we have to snap back into shape after a baby."

First look at our January issue with Aussie supermodel #MirandaKerr who opens up about motherhood, marriage, business and why she's loving her "mum-bod” (and beating the body bullies). Tap the link in bio. 💫

The Victoria's Secret model is happy to bide her time to regain her pre-pregnancy figure.

In fact, Miranda admitted her body may not ever feel the same as it did before the arrival of her second child.

She said: "I don't mind. It's all part of it. I took nine months - well, 10 months - to grow a beautiful child and it might take 10 months to feel good in a swimsuit again. Or longer. Or never!" 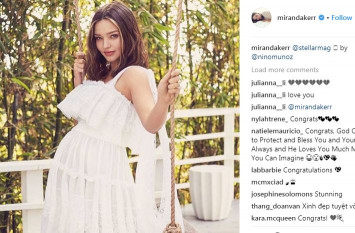 The British actor - who is the father of Miranda's son Flynn - is feeling "like a new person" and thinks he's "matured" a lot since the first time they started dating in 2016.

A source recently explained: "He is ready to settle down with Katy.

"In the past, he seemed so scattered and unwilling to settle down. He is like a new person now and everyone is excited for him."