The costume, which was unveiled on Thursday (Nov 29), featured a skirt digitally printed with a handshake - one arm features the North Korean flag and the other, the American flag - over the Singapore skyline. North Korean leader Kim Jong Un and United States President Donald Trump had met in Singapore in June.

Many netizens called the design ugly and aimed their criticism at the designer of the costume.

But Kasim, 48, says he was approached by the pageant organisers in June and at that point, the summit theme had already been decided.

He says: "When the organisers told us that this year's theme is the Trump-Kim Summit, honestly, I was a little hesitant at first due to the political sensitivities. But in the spirit of promoting world peace, friendship and unity, I accepted the challenge." 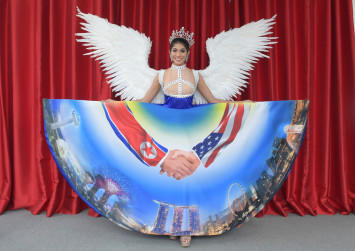 Kasim, who owns costume rental and design company Moephosis Concepts and was nominated for a Golden Horse Award in 2007 for his costume design work on local film 881, adds: "As a costume designer, I have to respect the decision of the artistic director, show director or in this case, the organisers of Miss Universe Singapore, and vice versa. I always work closely with them to ensure that I follow the brief to the best of my creative ability."

Some questioned why Kasim went for such a literal look to express Singapore's role in the summit.

He explains that he did so precisely because of the controversial theme.

He says: "Had I made it more subtle, others may misunderstand and think that I was trying to weave in any hidden messages."

While theatre and film productions, which Kasim has worked on, can showcase themes through multiple costumes and scenes, Kasim says the pageant theme had to be condensed into one dress.

And with a beauty pageant like Miss Universe, the national costume segment usually sees contestants in loud and bold designs in order to make an impression.

Would you say yes to the dress? The Miss Universe Singapore national costume has been revealed. Get more at https://bit.ly/2AvNAbC

Kasim is taking the criticism in his stride. Having designed the national costume three years in a row, he says he is used to the mixed reactions people have towards the designs.

"I'm a very positive person. I guess after designing and making national costumes for various pageants over the past 10 years, I'm mentally prepared for all kinds of responses," he says.

"I think it is important to listen to both the compliments and the criticisms. Only then can we all learn and continuously improve.

"The fact that many people have reacted so passionately to this year's costume shows that they love Singapore and they want the best for their country."

He urges Singaporeans to rally behind pageant winner 24-year-old Zahra Khanum, who will be donning the dress at the Miss Universe beauty pageant in Bangkok in December. "The spotlight is now on Zahra and we're very sure she will do us all proud in Bangkok."

The storm over the dress will not affect Kasim's love for his work and he does not rule out designing for Miss Universe Singapore again.

He says: "I love costumes and my passion is in costume design."