US model Mara Martin breastfeeds while walking the runway for the 2018 Sports Illustrated Swimsuit show in Miami.

MIAMI, United States - An American model has made a splash by breastfeeding her baby daughter on a Miami catwalk - no small gesture in a country where many women still feel uncomfortable nursing in public.

Walking the runway at a Sports Illustrated swimsuit show on Sunday, Mara Martin stepped out in a sparkling gold bikini while breastfeeding five-month-old Aria, kitted out for the occasion in green swimwear and noise-canceling headphones.

In an Instagram post a day later, Martin expressed thanks for the overwhelmingly positive public response - which far outweighed the smattering of posts on her social media feed criticising the move as "not appropriate" or even "gross."

Wow! WHAT A NIGHT! Words can’t even describe how amazing I feel after being picked to walk the runway for @si_swimsuit. Anyone who knows me, knows it has been a life long dream of mine. I can’t believe I am waking up to headlines with me and my daughter in them for doing something I do every day. It is truly so humbling and unreal to say the least. I’m so grateful to be able to share this message and hopefully normalize breastfeeding and also show others that women CAN DO IT ALL! But to be honest, the real reason I can’t believe it is a headline is because it shouldn’t be a headline!!! My story of being a mother and feeding her while walking is just that. Last night there are far more deserving headlines that our world should see. One woman is going to boot camp in two weeks to serve our country (@shauntness), one woman had a double mastectomy (@allynrose), and another is a cancer survivor, 2x paralympic gold medalist, as well as a mother herself (@bren_hucks you rock) Those are the stories that our world should be discussing!!!! Just thinking about all that was represented there... I desperately need to give the most thanks to @mj_day for this. She supported me in what I did last night. Without her support this wouldn’t even be discussed!!!! She and the entire Sports Illustrated family are the most amazing and incredible team to have worked with. THANK YOU for letting all 16 of us be our true selves, strong beautiful women!!! Because of you, my daughter is going to grow up in a better world, where she will always feel this way!!!!!! Lastly, to every single woman that rocked that runway with me. Be proud. I know I am of you! You all have inspired me in ways unimaginable. I love you all!!! #siswimsearch

"I can't believe I am waking up to headlines with me and my daughter in them for doing something I do every day," she wrote. "It is truly so humbling and unreal to say the least."

"I'm so grateful to be able to share this message and hopefully normalise breastfeeding and also show others that women CAN DO IT ALL!"

According to Martin and organizers interviewed Tuesday on NBC's "Today," it was a spontaneous decision to breastfeed Aria on the runway.

"She was getting a little hungry and it was her dinner time, because the show kept getting pushed back," Martin told "Today."

So when one of the team suggested she go ahead and nurse her on the runway, she said yes.

The debate over public breastfeeding regularly resurfaces in the United States, where women are strongly encouraged to nurse their babies, even though many return to work within weeks of giving birth. 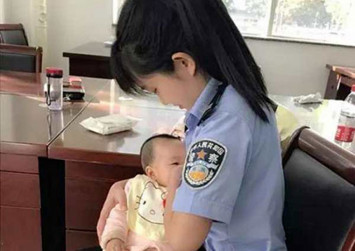 While all but a handful of US states give legal protection to mothers who breastfeed in public, much of society remains squeamish about the practice.

Cases of women being asked to cover up while feeding babies in restaurants, in stores or on public transport sporadically make headlines in the country - with "nurse-ins" held in protest to demand wider acceptance of the practice.

In the latest breastfeeding-related controversy, President Donald Trump weighed in this month to defend women's "access" to formula milk, after the United States was accused of seeking to torpedo a World Health Organisation resolution promoting breastfeeding.