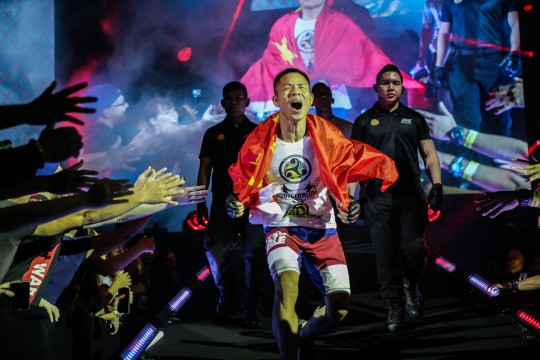 The Chinese star has an unblemished 8-0 record, with his last four wins coming under the ONE Championship banner.

He will look to extend his undefeated record when he returns to action at ONE: BEYOND THE HORIZON at the Baoshan Arena in Shanghai, China.

Chen takes on “Jungle Cat” Muhammad Aiman (4-2) on Saturday, 8 September in a battle of bantamweight contenders.

It is also a bout of great significance for the Chinese star, who will get the opportunity to compete on home soil for the first time as a ONE Championship athlete.

“Before, I always competed in a foreign land,” Chen explains.

“This time, the event is in Shanghai, so I am very excited. This is always what I dreamed of – competing in my home, on such a big international stage for an excellent fight.

“I am very confident, and I am well-prepared. I will give my best effort for all the people who support me.”

Training out of the Equilibrium Beijing gym, Chen has quickly become one of the most charismatic athletes on the ONE Championship roster.

His performances have matched his star power, as he has remained undefeated against increasingly talented opposition.

In his last outing, Chen faced significant adversity when he was badly rocked by Afghanistan’s Ahmad Qais Jasoor at ONE: SPIRIT OF A WARRIOR.

But “Rock Man” lived up to his tough moniker as he battled back to earn a third-round TKO finish after a back-and-forth bout.

“Even though there was an unexpected moment, I made it through and achieved my goal,” he says.

“I learned how to deal with the unexpected situation, how to be calm, and how to make it step-by-step until you get what you want.”

Chen’s matchup against Aiman offers a clash between two rising stars of the ONE bantamweight division, and hands “Rock Man” the toughest test of his mixed martial arts career to date.

Chen knows his Malaysian opponent will pose a tough test on September 8, but he believes he has found a weak spot in “Jungle Cat’s” skillset.

“He is very competitive in this division,” he says.

“He has strong stand-up skills and good punches. He is flexible with all of his movements, he is fast, and has good body control, but I think he needs to improve his ground skills.

“I am a very comprehensive fighter. I believe I will give him some pressure, and a lot of trouble. I know how to control the pace, and I will catch his weakness in a short time.

“After this, there will be more people that know me. I will fight my best, and ‘Rock Man’ will be remembered.”

With the confidence that comes with an undefeated record and the bonus of competing on home soil for the first time as a ONE Championship athlete, “Rock Man” has all the motivation he needs heading into the bout.

Of the charismatic Chinese star can reproduce the form of his past bouts, he should thrill the crowd in Shanghai with another exciting display.