12 protesters arrested as Hong Kong police crack down on violence

HONG KONG - Demonstrators fearful of repercussions from Monday’s violence when protesters stormed and vandalised the Legislative Council (LegCo) building had their worst fears confirmed last night when police announced the arrest of at least 12 protesters.

Those nabbed, aged between 14 and 36, were alleged to have possessed offensive weapons, taken part in unlawful assembly and attacked police officers.

A large quantity of bricks, steel bars and hand-made shields were seized in the demonstration zone outside the complex, the police said on their Facebook page.

A report in the South China Morning Post, citing sources in law enforcement, said earlier in the evening that police had identified dozens of protesters.

The newspaper said police officers, working with government forensic experts, had gathered helmets, face masks and iron bars left by protesters at the LegCo. They had conducted DNA tests and collected fingerprints from them.

Earlier on Wednesday, police announced that eight people – six men and two women, aged between 16 and 40 – were arrested for allegedly “doxxing” officers and launching cyber attacks on police websites.

The act of doxxing – which involves the release online of stolen personal data – had, according to the police, resulted in some officers and their family members receiving death threats. 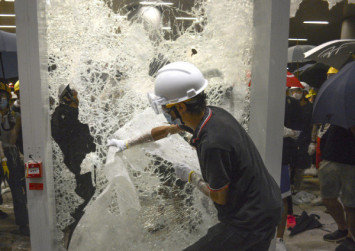 On Wednesday, some protesters told The Straits Times that they were keeping a low profile for now, after the violence of Monday night when a mob of protesters stormed the LegCo building, damaged monitors and sprayed graffiti on furniture and walls.

“A lot of us are emotionally drained right now, we are a little bit at a loss about what to do next,” said Ms Yanis Wong, 19. The film student from the Hong Kong Academy of Performing Arts had watched protesters ramming a metal cart into the glass walls of the LegCo building to gain entry on Monday.

“Each time it smashed against the wall, my heart would tighten because you know those who are in front (doing that) might end up paying a big price for their actions,” she said.

She added that many had thought the police would disperse the student protesters before they could enter the building. Instead, the siege dragged on for almost eight hours before the protesters breached the main entrance at about 9pm.

Mr Cassidy Yu, 21, said breaking into the legislative chamber was a last resort. “A lot of us have been coming out and protesting peacefully, but the government didn’t listen,” said the barista.

Hundreds of protesters stormed into Hong Kong's Parliament, heightening tensions after weeks of demonstrations against...

Pro-democracy legislator Charles Mok said the violence was “a setback for our political cause” because it caused many people to be less sympathetic to the protesters. “But the government also shares some of the blame. They could have prevented this escalation if they had addressed the need for dialogue,” he added.

On Wednesday, Beijing again hit back at British Foreign Secretary Jeremy Hunt’s remarks that the 1984 treaty inked by China and Britain over the return of Hong Kong had guaranteed basic freedoms to the city for 50 years.

“If the British Parliament is besieged, broken into and wrecked... will the British government sit there and not take action?” Chinese Foreign Ministry spokesman Geng Shuang said.