A quarantine officer in his 50s and a health ministry official in his 40s, who were sent to the Diamond Princess cruise ship to help with on-board efforts to contain the deadly coronavirus, have both tested positive.

TOKYO - Two more officials sent to a cruise ship quarantined off Japan to help with on-board efforts to contain the deadly coronavirus have contracted the illness themselves, authorities said Monday (Feb 24).

The announcement came as experts warned the next one to three weeks would be "crucial" to preventing widespread infections and as fears deepen that the isolation of the virus-stricken Diamond Princess has been ineffective.

A quarantine officer in his 50s and a health ministry official in his 40s both tested positive and are in hospital, the ministry said, after they were dispatched separately to the vessel earlier this month.

The new infections come after Japan Sunday reported a third death among people who spent time on the ship - a man in his 80s who died from pneumonia.

Six officials linked to containment work on the boat have now tested positive, fuelling doubts about the effectiveness of the quarantine.

"We don't know at the moment through what routes the infections occurred. We'll find out and take measures," a ministry official told reporters.

More than 690 ship passengers have so far fallen ill with the pathogen, and off the vessel Japan has confirmed over 140 cases across the country, including an elderly woman who died.

At least 20 foreigners evacuated from the boat have tested positive after returning home.

Shigeru Omi, chief director at the Japan Community Healthcare Organisation and an adviser to the government, defended the way the quarantine had been carried out. 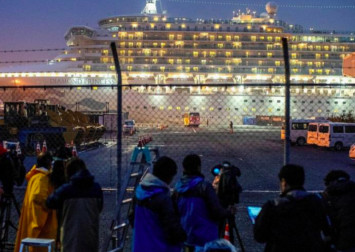 He said most of those infected must have contracted the illness before Japan took action on Feb 5.

"I admit the isolation policy was not perfect. The ship was not designed as a hospital. The ship is a ship," he said.

But he added that the policy had been effective "to a large extent" and said infected patients who previously tested negative may have done so due to the sensitivity of the testing kit or level of virus in the body.

Omi also said Japan was at a "crossroads" in its efforts to prevent the spread and the "coming one week, two weeks or three weeks are very crucial".

But he cautioned it was "too early" to say whether Tokyo should go ahead with hosting the Olympic Games this summer.