SINGAPORE - Three Singapore Red Cross volunteers helping out with relief efforts at a village in Lombok were caught in the latest earthquake to rock the island on Thursday (Aug 9).

The group, made up of team leader Lee Siew Yian, Mr Kamaraj Pandian and Ms Sally Low, was buying relief supplies at a market in Ampenan City in West Lombok, when the 6.2 magnitude earthquake struck.

Ms Lee, the co-founder of humanitarian platform The Good Exchange, told The Straits Times: "The ground started to shake and it was quite loud. We ran out of the market to the main road.

"The elderly woman porter was holding onto my arm and she was praying... When we arrived at the main road, I felt myself shaking (with) fear from the quake."

Ms Lee said the tremors were quite strong and resulted in some buildings collapsing.

A video posted on her Facebook page shows a woman clinging tightly onto her arm as they walk hurriedly towards a main road. Some locals are already gathered along the road.

After the 6.2M earthquake, people were running out of the market. 9 August 2018

After Ms Lee calmed down, she comforted the five accompanying women porters and asked her local guide to pay them such that they could quickly go home.

The porters had been helping to load relief supplies onto trucks.

She said: "The women came to us and said they were frightened and wanted to go home. I remembered they must need money during this time."

A humanitarian crisis is looming in Lombok, where thousands have been left homeless and in desperate need of clean water, food, medicine and shelter, after a 6.9 quake on Sunday.

Indonesia's disaster mitigation agency's (BNPB) official death toll from Sunday's quake stood at 131 on Wednesday, although some Indonesian officials put the number at 347. A BNPB spokesman had told news agency Reuters that there had been "a big increase" in the toll but did not provide an updated number.

The latest quake on the tropical tourist island sent people running out onto the roads in panic and resulted in the collapse of some buildings, according to eyewitness reports.

Despite the incident and the risks of further quakes, Ms Lee and her team have remained steadfast in their determination to help out on the ground.

The team arrived in Lombok on Wednesday. 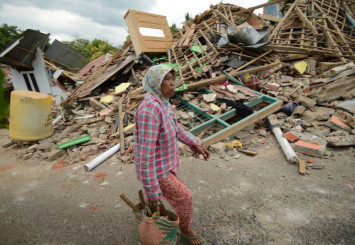 Ms Lee had reached out to the head of international services at the Singapore Red Cross (SRC) on Monday to ask if they could support her initiative to help out on the island, and after the SRC agreed, she prepared for the trip and raised funds on Tuesday.

Mr Kamaraj and Ms Low then volunteered to help out on the mission.

As of Thursday night, the team had distributed 3,200kg of rice and other supplies such as bottled water and cooking oil to two villages.

Ms Lee had already planned for a trip to Lombok in September, as part of her volunteer work with A New Vision, a non-profit organisation that aims to combat global blindness.

But after the quake on Sunday, she reached out to her contact in Lombok, who told her that most aid went to North Lombok and very little to other parts.

All three members of the SRC team have received overseas disaster deployment training from the SRC, and have the knowledge to respond during emergencies.

Ms Lee had also went to Nepal for earthquake relief work back in 2015.

Ms Lee said: "My appeal to the public is to give their help through relief agencies or to people they trust. Do not come to Lombok untrained or unprepared."

Her decision to help out was not without sacrifice though.

She said: "When I told my guide that today is Singapore's Independence Day and my mum's birthday, I found myself choking back tears.

"When I made a decision to come, I knew I will miss her birthday. But I guess the people here need a lot more help, so I came anyway."