6 activists stand trial in Indonesia on charges of treason

JAKARTA - Five Papuan pro-independence students and a rights activist went on trial on Thursday (Dec 19) on charges of treason after waving morning star flags that are a separatist symbol during a peaceful protest in front of Indonesia's presidential palace.

The rally in the capital, Jakarta, in August was part of weeks of protests triggered by videos that circulated widely on the Internet showing police, backed by soldiers, calling Papuan students "monkeys" and "dogs".

Paulus Suryanta Ginting, an Indonesian rights activist and the spokesman for the Indonesian People's Front for West Papua, was arrested three days after participating in a rally by about 100 West Papuan students in Jakarta on Aug 28 to protest against racism and call for independence for the restive region.

Prosecutors charged them with treason, which carries a possible penalty of life imprisonment. The six defendants denied any wrongdoing.

Two wore traditional Papuan clothing and headgear during Thursday's trial. They painted the word "monkey" on their bodies.

They are being tried separately at Central Jakarta District Court. Rights activists and Papuan students packed the courtroom, some wearing headbands adorned with the morning star flag.

In the indictments, prosecutors said the defendants plotted to separate the Papua region from Indonesia.

Prosecutors said they organised rallies on Aug 22 and 28 in which about 100 protesters marched down a road leading to Indonesia's army headquarters and presidential palace chanting "Freedom Papua".

Many in the crowd painted their faces with morning star symbols and waved separatist flags. 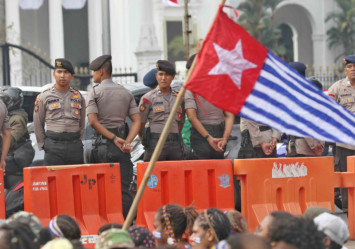 The defendants demanded in speeches during the protests that the government hold a referendum on independence for Papua, prosecutors said.

The case has highlighted Indonesia's sensitivity about the Papua region, where the indigenous Papuan people oppose Indonesian rule.

Papua is a former Dutch colony in the western part of New Guinea that is ethnically and culturally distinct from much of Indonesia. It was incorporated into Indonesia in 1969 after a UN-sponsored ballot that was seen as a sham by many.

Since then, a low-level insurgency has continued in the mineral-rich region, which is divided into two provinces, Papua and West Papua.

In recent years, some Papua students, including some who study in other provinces, have become vocal in calling for self-determination for the region.