An Indonesian pilot(2nd-R) and flight attendants arrive at the Sultan Iskandarmuda international airport in Aceh on January 30, 2018.

BANDA ACEH, Indonesia - The Indonesian province said Tuesday that it is ordering Muslim female flight attendants landing in the region to don a hijab upon arrival - or face punishment by religious police.

Muslim women in Aceh, on the island of Sumatra, are required to wear the Islamic headscarf under religious law, while non-Muslim females can opt to wear modest clothing instead.

But some Muslim flight attendants who do not regularly wear the hijab were skipping the local practice during short layovers, forcing Aceh to issue the new regulations, said Mawardy Ali, head of Aceh Besar district, which includes provincial capital Banda Aceh. 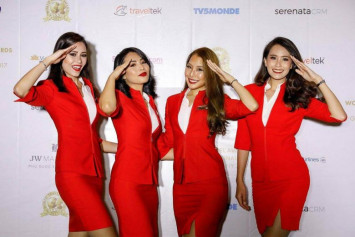 "I hope the airlines respect the uniqueness of Aceh where Sharia law is implemented," he told AFP, adding that he would aim to meet with some half a dozen affected airlines this week.

"We are disseminating this regulation to the airlines through the end of this week. Later, we'll talk about punishment if we find there have been violations," Ali added.

"If a (Muslim) crew member fails to comply, we will reprimand her. If she does it repeatedly, I will order Sharia police to nab her."

He did not say what sort of punishment would apply to those who refused to comply, though hijab violations usually result in a stern reprimand.

Ali said any sanction would not include public flogging - a common punishment in Aceh for a host of crimes including selling alcohol and having gay sex.

It was unclear how many flight attendants could be affected.

Many women in Indonesia, the world's biggest Muslim-majority nation, do not wear the hair-covering scarf and Islamic law only applies in Aceh - the region won special autonomy in 2001 as part of a deal to end a long-running separatist insurgency.

Concern has been growing among rights activists about rising religious conservatism in Aceh, where police at the weekend forcibly cut the hair of a group of transgender women and made them wear male clothing to make them more "manly".

Garuda said it would comply with the new regulations and may add a special uniform worn by its female staff on Middle-East bound flights - which includes the hijab - to Aceh flights.

Citilink spokesman Benny Butarbutar, meanwhile, said the carrier has already been using an Islamic-compliant uniform for its attendants servicing Banda Aceh since 2015.

Other airlines affected include Indonesian budget carrier Lion Air and its full-service subsidiary Batik Air, which operate regular flights between Aceh and other parts of the Southeast Asian archipelago.

AirAsia and Firefly, both Malaysia-based, are the main foreign carriers that operate flights to Banda Aceh.