After Accidental Star To Career, Mohammad Karaki Stands On The Edge Of Greatness In ONE 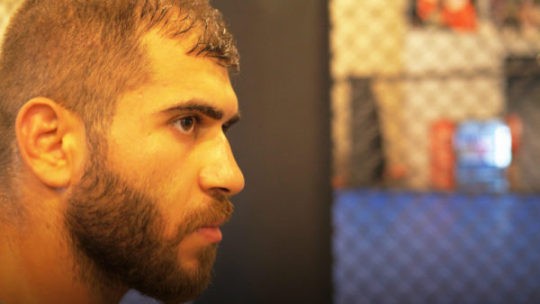 Mohammad “O Lutador” Karaki wanted to be an astronaut as a youngster, but now he has different career goals as he bids to dethrone one of the biggest stars in ONE Championship.

The undefeated 27-year-old Lebanese athlete will take on Aung La N Sang for the ONE Middleweight World Title in the main event of ONE: PURSUIT OF GREATNESS in Yangon, Myanmar.

Victory will take Karaki to the pinnacle of his career, which has its foundations in his childhood when he took up karate.

Karaki was born in Morocco, just a year after the end of Lebanon’s 15-year civil war, and his parents moved the family back to Lebanon in the early 2000s.

He took up karate as a 14-year-old, but the country was a troubled land – torn apart by its differences.

In 2006, Israel declared war on Lebanon, forcing Karaki’s family to flee and leave their homeland for the second time.

It was a tough start to life for “O Lutador”, but he says those experiences in his formative years helped shape him into the man he is today.

“The biggest fighters have made themselves from nothing,” he says.

“The lives of fighters usually have them endure tough upbringings, and I look up to those ideals.”

Karaki’s love of karate developed into a fascination with mixed martial arts and, even though his parents were unsure about their son taking up the sport, they supported him when they saw how well he was performing.

“I liked it a lot. It certainly sparked something inside of me,” he explains.

“They were hesitant and did not encourage me at first, then they saw the job I was doing, and they saw my potential.”

He defeated Ammar Majed via first-round TKO in a Desert Force event in Jordan to pick up his first win, and he was immediately hooked. He then resolved to improve his all-around mixed martial arts skill set.

“I win because I hate losing. I breathe success in everything I do,” he says.

“This is what motivates me to go on and on, and whenever I set my mind to something, I have to achieve it.”

He went on to build an impressive undefeated record and capture his latest belt in April when he won the Phoenix Middleweight Title with a first-round armbar of Moroccan athlete Salah Eddine Dekhissi.

However, that win did not come easy as he had to battle through injury to win the belt.

“Professionals need to overcome hardships to become champions,” he says.

“During the last fight, my chest was injured, and people around me questioned whether I should be involved in that fight.

“I kept my injury private, only sharing my condition details with my close circle and I’m only talking about it after the fight that I won.”

That win earned Karaki a call-up to ONE, and a dream debut opportunity against ONE Middleweight World Champion Aung La N Sang.

With Karaki heading into the bout with a perfect 9-0 slate and eight finishes to his name, as well as the Desert Force Middleweight and Light-Heavyweight Titles on top of his Phoenix Middleweight Championship, he heads into the biggest test of his career in superb form.

Though he knows he will have to go into “The Burmese Python’s” backyard to try to win the ONE World Title, he has experience of capturing gold in enemy territory.

“When I fought Ibrahim Elsawi, it was a very difficult match, so [beating him] and winning the Desert Force Middleweight Championship was special,” he says.

Karaki will look to call upon that experience against Aung La N Sang in the toughest test of his career, on the biggest stage of his career.

It is an opportunity to reach the summit at his first attempt inside the ONE cage, and it is one that he plans to take with both hands.

“When I chose to become a professional fighter, I told myself that I need to reach the highest level,” he says.

“Step by step, I’m getting there.”