After Covid-19, 'black fungus' robs some in India of their eyesight

NEW DELHI - Saheb Rao Shinde's family thought the worst was over when the 65-year-old recovered from Covid-19 last month at his home in western India. But a few weeks later, the revenue-stamp vendor lost sight in one eye.

After a catastrophic second wave of Covid-19 in India since April which has seen its overall death toll climb to almost 400,000, thousands who contracted the virus also suffered from a rare fungal disease called mucormycosis, or "black fungus".

The South Asian country - which has more than 30.4 million confirmed Covid-19 infections, second only to the United States - has so far reported more than 40,845 cases of mucormycosis.

Many like Mr Shinde may never be able to regain their sight after contracting the fungal disease which causes blackening or discoloration over the nose, blurred or double vision, chest pain, breathing difficulties and coughing blood.

"Father was fit and healthy, now he doesn't feel like eating," said his daughter, who did not want to be named. "His teeth have also been removed, it's very sad."

Mr Shinde, from the arid western Indian region of Marathwada, will resume work after he recovers from this, his daughter told Reuters in Mumbai.

Reuters spoke to several other sufferers of mucormycosis across India. 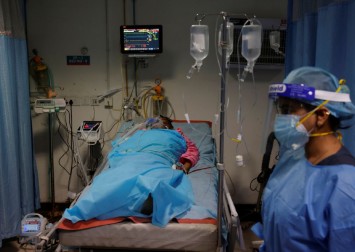 Mr Adesh Kumar, a 39-year-old farmer in the northern state of Uttar Pradesh, lost sight in his left eye. He had to borrow money to pay for medicine, secured against some of his land.

India ordered tighter surveillance of mucormycosis in May, as it compounded the challenge for Covid-19 patients, especially those on steroid therapy and with diabetes. Experts say an overuse of certain drugs which suppress the immune system could be causing the surge of the fungal infection.

"We are seeing a lot of mucormycosis cases post-Covid-19 infections, since Covid-19 itself is known to decrease the immunity," said Dr Charuta Mandke of the ophthalmology department at Dr R N Cooper Municipal General Hospital in Mumbai.