After quakes and flooding, Japan picks 'disaster' as 2018 symbol

Japan on Wednesday selected the Chinese character for "disaster" as its "defining symbol" for 2018, a year that saw the country hit by deadly floods, earthquakes and storms.

Japanese TV stations broadcast the annual announcement live, with Seihan Mori, master of the ancient Kiyomizu temple in Kyoto, writing the character on a huge white panel with an ink-soaked calligraphy brush.

"Many people experienced the threat of natural disasters such as earthquakes, heavy rain, typhoons and heatwaves," the Japan Kanji Aptitude Testing Foundation, which organises the event, said in a press release.

At the end of every year, the general public votes for the Chinese character they think embodies the key news and events of the previous 12 months.

The country was hit by a series of natural disasters in 2018, starting with massive flooding in western regions that killed over 200 people. 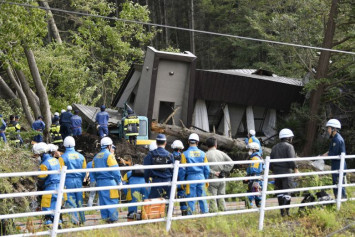 It was also battered by a typhoon that inundated a major international airport, and an earthquake in the north that triggered landslides and disrupted supply lines.

An "unprecedented" heatwave also struck the country over the summer, causing more than 150 deaths, with over 80,000 people hospitalised.

The series of disasters hit GDP, with the country's economy shrinking in the three months to September.

"I was reminded of how scary natural disasters are," said a 42-year-old woman from quake-battered northern Hokkaido, who was cited in a statement from the organiser.

"The power went out immediately after the quake and I spent days for the first time without electricity," she said.

Last year, Japan picked "North" following a series of North Korean missile launches, and the year before the choice was "gold", in celebration of the success of Japanese athletes at the Rio Olympics.

Chinese characters, or Kanji, are widely used in Japanese, along with other types of alphabets.