The picturesque island next to holiday hotspot Bali was hit by two deadly quakes on July 29 and Aug 5. On Sunday it was shaken again by a string of fresh tremors and aftershocks, with the strongest measuring 6.9 magnitude.

At least 10 people were killed on Sunday, mostly by falling debris, but authorities said the death toll would likely rise.

Aid organisations have vowed to boost humanitarian assistance on the island as devastated residents struggle in makeshift displacement camps.

"We are focusing on the basics, provision of shelter materials - tarpaulins, shelter kits, hygiene kits," said Tom Howells from Save the Children.

"We have shipped enough for about 20,000 people over the past two weeks," he told AFP. 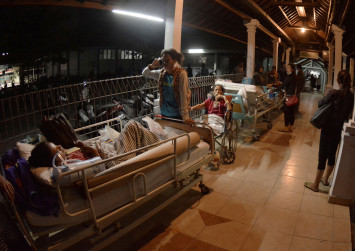 However, relief agencies fret that access to food, shelter and clean water is insufficient for some of the more than 430,000 displaced by the disaster.

"There has been damage to the water infrastructure which is already quite poor in Lombok due to a lack of ground supply and drought conditions," Howells said.

Tens of thousands of homes, mosques and businesses across Lombok had already been destroyed by the 6.9-magnitude quake on Aug 5 that killed at least 481 people.

A week before that quake, a tremor surged through the island and killed 17.

Most people caught in the latest tremor had been outside their homes or at shelters when it struck which limited casualties, authorities have said.

Rebuilding costs are estimated to top 7 trillion rupiah (US$480 million).

Authorities are considering whether to designate the quakes as a national emergency, which would unlock the central government's 4 trillion rupiah disaster relief fund.

Indonesia sits on the so-called Pacific "Ring of Fire", where tectonic plates collide and many of the world's volcanic eruptions and earthquakes occur.

The Australian and Eurasian plates, which sit under the archipelago, have been colliding and putting stress on key area fault lines, according geologists.