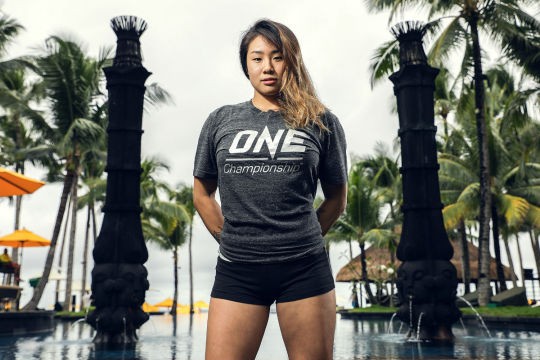 ONE Atomweight World Champion Angela Lee is bidding for greatness in her next match-up.

The undefeated Singaporean is moving up a weight class to challenge Xiong Jing Nan for the ONE Strawweight World Champion in the main event of ONE: HEART OF THE LION in Singapore on 9 November.

It is a bout that has the martial arts world talking, and nobody is more excited for the match-up than Lee herself.

“I think it’s a fan-favourite fight with two female fighters matching up – champion versus champion,” she says.

“I think her style of being very aggressive and me stepping up in weight [has people thinking], ‘Oh, she’s going to get knocked out,’ or, ‘She’s going to be too small for her.’ But I don’t think that’s the case at all.

“Everyone is saying I’m more of an underdog in this fight, and I’m embracing it. It doesn’t matter if I’m going to be in the red corner or the blue corner. All that matters is, at the end of the night, I’m going to have gold around my waist.”

Lee captured the inaugural ONE Atomweight World Title by defeating Japanese veteran Mei Yamaguchi in May 2015, and then defended her belt three times to establish herself as one of ONE Championship’s most dominant champions.

Now she is looking to become the first female martial artist to hold titles in two divisions simultaneously.

That aspect is key, as she explains moving up a division will also allow her to be more active and compete more often in front of her adoring fans.

“Strawweight is just an opportunity for me to compete more and stay more active in both divisions,” Lee explains.

“Staying so active will help me keep my weight to a healthier number to compete at atomweight, and not need eight weeks to prepare and really cut down because, honestly, that was a really big struggle for me.

“Every time a fight came, it was so stressful thinking about that. With strawweight, it’s a chance for me to fight more in my natural division and to feel stronger.”

Lee knows her move up to strawweight will pose the biggest challenge of her mixed martial arts career. Reigning World Champion Xiong has showcased her heavy-handed striking in her recent match-ups, and Lee knows she will have to be wary of her Chinese opponent’s hands.

But Lee says she has the all-around mixed martial arts skill set to prevail when the pair meet in the Singapore Indoor Stadium.

“I acknowledge her power, and I respect it,” the Singaporean adds.

“I think her strength lies in her striking, but I think we’ve made the perfect game plan to deal with this in all kinds of scenarios.

“I think we found the fastest, most efficient way to take her out, and I’m looking forward to implementing my game plan. I think she won’t be able to stop it. She won’t have an answer for it.”

Some, including ONE CEO and Chairman Chatri Sityodtong, have suggested Xiong might be the favourite heading into the contest, but that only serves to motivate Lee even further as she bids to complete an historic World Championship double.

“I want to have a performance of a lifetime,” she says.

“I want people to say, ‘Wow, no one can touch Angela, she’s the baddest female fighter right now.’ I look forward to going out there and proving to everyone why I’m the best female fighter in this organisation.”