Mrs Ani Yudhoyono was widely known as an avid photographer and she was active on social media platforms, particularly Instagram, where she had 6.4 million followers.

Despite her illness, she remained positive and even shared her struggle with the disease through Instagram.

"Insya Allah (God willing), I will never give up fighting this cancer," she posted. 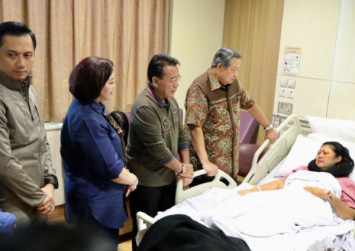 She would capture natural beauty, street scenes and family moments on her camera or smartphone, and continued doing so even on her bed at the National University Hospital.

On Feb 24, Mrs Yudhoyono took a picture of the sunrise from the window of her ward and posted it on her Instagram account - aniyudhoyono.

"The rising sun always brings a different mental condition. It will never be the same. But surely, it will always carry new hopes for me, for you and for all of us," she wrote.

Earlier on Feb 11, more than a week after her hospitalisation, she captured a card drawn and written by her nine-year-old grandchild, Almira Tunggadewi Yudhoyono, the daughter of her first son Agus Harimurti Yudhoyono and Madam Annisa Pohan.

"This card is made by Aira, my granddaughter who was on her shift to accompany me in the hospital. The three figures in the photo were made from band-aid. Love you Aira."

And her physical weakness did not hinder her from voting in Indonesia's legislative and presidential elections in April.

She cast her ballot from her bed, showing the poll cards next to a poll box, in one of her Instagram pictures.

She last posted a picture of herself in a wheelchair with her husband outside the hospital ward on May 16.

"Alhamdulillah (God be praised), after three months of not breathing fresh air, today I was permitted by the doctor to leave the room to see the green leaves, blue sky and have some fresh air even if it was only for one or two hours."