Bangladesh to charge 16 after girl burned to death

DHAKA - Bangladesh police were set to file charges on Wednesday (May 29) against 16 people, including the headmaster of an Islamic seminary, over the shocking murder of a 19-year-old girl burned to death.

The killing of Ms Nusrat Jahan Rafi last month sparked protests across the South Asian nation, with the Prime Minister promising to prosecute all those involved.

Ms Rafi was lured to the rooftop of the Islamic seminary she attended, where her attackers asked her to withdraw a sexual harassment complaint filed with police against the head teacher.

When she refused, she was doused in kerosene and set on fire. She died five days later, triggering outrage. Her death highlighted the alarming rise in sexual harassment cases in the country.

Bangladesh's Police Bureau of Investigation said they would file the charge sheet in a court in the country's south later on Wednesday against the 16 people, who include two girls who were classmates of Ms Rafi.

"They are charged under the women and children repression law and we'll recommend death penalty for all 16 accused," PBI lead investigator Mohammad Iqbal told AFP.

Investigator Iqbal said the principal of the Sonagazi Islamia Senior Fazil Madrasa Siraj Ud Doula, where Ms Rafi was a student, ordered the murder from jail. 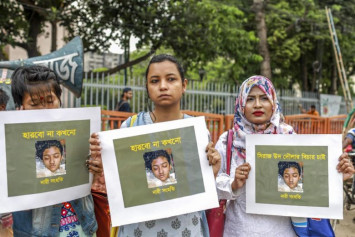 Ms Rafi had gone to police in late March to report the alleged sexual harassment against the teacher, and a leaked video shows the local police station chief registering her complaint but dismissing it as "not a big deal".

Investigator Iqbal said at least five people, including three of Ms Rafi's classmates, had tied her up with a scarf before setting her on fire. The plan was to pass the incident off as a case of suicide.

Ms Rafi suffered burns to 80 per cent of her body and died in hospital on April 10. But she recorded a video before her death, repeating her allegations against the principal.

"We want all the culprits to be hanged to death," he told AFP.

The head of Mahila Parishad, a women's rights group, gave a "guarded welcome" at the quick investigation of the case, but said more needed to be done to end a "culture of impunity" over sexual harassment and rape cases.

According to the group, about 950 women were raped in Bangladesh last year.