A worker loads empty oxygen cylinders onto a supply van to be transported to a filling station, at a Covid-19 hospital, amidst the spread of the coronavirus disease (Covid-19) in Ahmedabad, India, April 22, 2021.

Pankaj Solanki, a doctor and the director of a small hospital in New Delhi, rushed to an oxygen vendor earlier this week to secure enough cylinders to keep 10 Covid-19 patients on the ICU ward breathing.

His supplies would only last until Thursday night (April 23), and so he has sent a driver out to try to find more.

"It is mental agony. I can't bear it any more. What if something happens to the patients?" he told Reuters.

The last-minute scramble for oxygen at Dharamveer Solanki Hospital is playing out across the city and the country, which is facing the world's largest surge in Covid-19 cases.

Hospitals in India's capital, renowned for some of the best medical care in the country, are unable to guarantee basic services and thousands of lives hang in the balance - a stark warning of how India's healthcare system is buckling amid the pandemic.

Big private hospital chains have not been spared.

This week in New Delhi, which has been hit particularly hard by the coronavirus, seven Max Healthcare hospitals treating more than 1,400 Covid-19 patients were down to between two and 18 hours of oxygen left.

Staff at a major facility of the Apollo group had a harrowing night wondering if oxygen to 200 patients would run out. A tanker arrived at around 3am, just in time, a source at the hospital said.

As panic breaks out at hospitals unable to admit some people with severe Covid-19 symptoms, police are being deployed to secure oxygen. In court, judges are challenging the central government to do more to address shortages.

In a late-night court hearing on Wednesday, Delhi justices called on Prime Minister Narendra Modi's government to "beg, borrow, steal or import" to meet the city's needs. Officials said they were arranging supplies, but the judges weren't convinced.

The state "cannot say 'we can provide only this much and no more', so if people die, let them die; that cannot be an answer by a responsible sovereign state," said Justice Vipin Sanghi.

Demand for medical oxygen has soared. India recorded 314,835 new Covid-19 infections on Thursday, the highest tally anywhere during the pandemic. In Delhi alone, the daily rise is around 25,000.

Modi and Delhi Chief Minister Arvind Kejriwal have been criticised for failing to plan for the upsurge in cases.

On April 13, when Delhi recorded 13,000 new cases, Kejriwal told a news channel there was "no shortage of oxygen". Five days later, he tweeted, "OXYGEN HAS BECOME AN EMERGENCY".

Del facing acute shortage of oxygen. In view of sharply increasing cases, Del needs much more than normal supply. Rather than increasing supply, our normal supply has been sharply reduced and Delhi’s quota has been diverted to other states.

OXYGEN HAS BECOME AN EMERGENCY IN DEL

"It is poor forecasting. Maybe they are not able to understand the gravity of the situation," said Anant Bhan, an independent researcher of global health and bioethics. 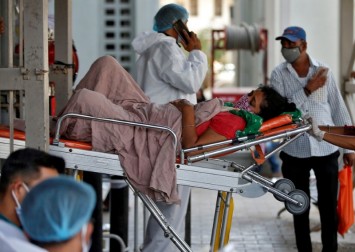 "This is a reminder again - we should have extra reserves of oxygen. It shows poor planning."

A senior gas industry source directly involved in supplying oxygen to Delhi hospitals said the city had moved too slowly in recent days in liaising with authorities and suppliers.

The city has few production units nearby and transportation is a challenge.

The Delhi government and federal health ministry did not respond to Reuters questions for this story.

At an INOX gas plant in the state of Uttar Pradesh, around an hour's drive from Delhi, 12 trucks from cities across northern India were waiting to load oxygen on Thursday.

Six drivers told Reuters they had faced long delays, as surging demand from hospitals in the capital and elsewhere outstripped supply.

"We have been waiting for three days," said Bhure Singh, one of the drivers. "Demand has increased and there is no gas."

The plant has been visited by government officials and police, some carrying assault rifles. An Uttar Pradesh police officer said they had been given orders to escort trucks in some instances to make sure they reached their destination.

At one Max facility in west Delhi treating 285 Covid-19 patients, oxygen supplies this week ran dry as authorities diverted their tanker to another hospital, the healthcare group wrote in a letter to Delhi's health minister.

Staff had to borrow cylinders from another facility.

The medical superintendent at the Shanti Mukund Hospital, Kulwinder Singh, told Reuters on Thursday they were asking families of 85 patients who needed high-flow oxygen to make other arrangements because they had only two hours' worth of supply.

Some hospitals in Delhi have run out of oxygen altogether, putting lives at risk, the city's deputy chief minister Manish Sisodia said in a televised address. "After some time, saving lives would be difficult," he warned.

In the capital, the fight for oxygen has reached the High Court, where judges convened late on Wednesday night to hear a plea from Max hospitals.

For around two hours, lawyers for Delhi and the federal government traded barbs over transportation challenges and supplies. Other lawyers shared real-time updates on oxygen tanks reaching hospitals in the city, and a judge took notes on demand and supply statistics for the capital.

The Supreme Court also intervened, saying Modi's administration should draw up a plan to address shortages of oxygen and critical supplies.