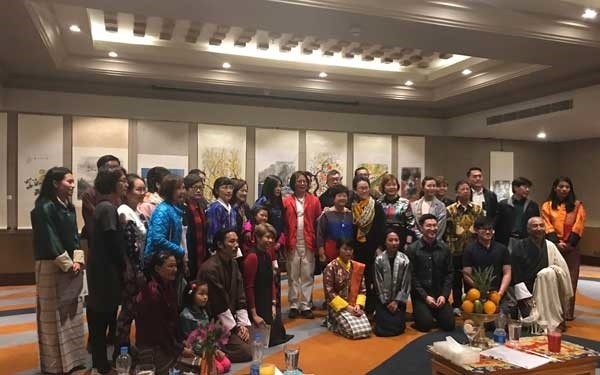 Painters from both Bhutan and Singapore came together last Saturday (May 5) to showcase their work in a joint exhibition titled "Colors of Love".

Co-organised by Buddhism centre Drukpa Singapore and voluntary artists studio VAST Bhutan, the aim of the charity exhibition is to showcase artistic expressions of compassion and unconditional love by painters from both countries, as well as to raise funds to promote dharma activities in Singapore.

The works showcased at the exhibition included Chinese brushwork paintings from 16 Singaporean artists and contemporary artwork from nine Bhutanese artists.

The group of Singaporean painters were led by Mr Lin Lu Zai, president of Aspiration of Fine Arts.

Mr Lin held a similar exhibition in Singapore in 2016 after his first audience with Gyalwa Dokhampa, one of the spiritual heads of the Drukpa lineage. According to Mr Lin, "Colors of Love" is a "fitting sequel to the last exhibition" as the previous exhibition "Loving The Earth" focused on appreciating and loving nature.

Ex-politician from Singapore showcases her painting

Among the Singaporean contingent of artists is Madam Cynthia Phua, an ex-member of Singapore's ruling party People's Action Party (PAP).

After leaving politics in 2011 when her ward lost to the opposition party, Madam Phua entered the corporate world till 2015. Currently a management consultant for a few companies, Madam Phua now spends most of her time nurturing her love for art, which includes Chinese brushstroke painting and pottery.

Madam Phua is showcasing one painting in this exhibition. She had sold six paintings at the previous exhibition "Loving The Earth" for S$1,800 each, of which the proceeds went to Drukpa Singapore.

This time round, her piece titled "Beauty of the Lion City", features a group of sparrows resting on bougainvillea branches with banana leaves among the flowers.

Madam Phua explained: "I wanted something to represent Singapore. A lot Bhutanese don't know about Singapore's history as a a fishing village, so I took banana leaves as a key element."

According to her, sparrows and banana trees were common sights in Singapore's past. She also explained why she included the colorful bougainvillea flowers in her painting.

"Every time I come home, I see bougainvilleas and I feel so warm, moreover it is colorful," added Madam Phua, referring to rows of bougainvilleas along the expressway leading to Changi Airport.

She also said she was struck by His Eminence Gyalwa Dokhampa's speech last August at "Loving The Earth" exhibition, when he spoke about interdependence of humans and nature.

"I wanted to include sparrows as a symbol of respect of the environment and of human beings taking care of lesser beings," said Madam Phua, who said she took a month to conceptualize the piece.

She went through three drafts before her final painting that is being showcased in Bhutan.

Madam Phua said she learnt the art of Chinese painting through Mr Lin, who told Bhutan Times that she is a talented and hardworking student, and works through the night.

Painting Tiger's Nest in 15 minutes under the rain

During the exhibition, Madam Phua pointed out that she was a "demanding student" who made Mr Lin paint Tiger's Nest on the spot during their hike up the location on Friday.

"I brought an umbrella and painting materials, and I made him do it (paint) then and there!", laughed Madam Phua.

During his speech, Mr Lin mentioned that "Bhutan has natural beauty, friendly and appreciative people". "Bhutan has many meaningful things for foreign visitors to experience and learn. I believe this event will benefit and inspire all the participants," he said.

The exhibition will open for public viewing from May 8 to May 30 at the BhutanArt Gallery (@vastbhutanart) at Le Meridien Complex in Thimphu, Bhutan.