Blooming cherry blossoms in Tokyo on March 19, 2018. An active typhoon season could have led to the flowers blooming early.

TOKYO - The delicate blossoms of the cherry tree might be synonymous with the onset of spring in Japan - except this year they're also blooming in autumn, a weather forecasting company said on Wednesday (Oct 17).

Experts told local media that the rare late blooms could be the result of this year's unusual weather, including a particularly active typhoon season.

Weathernews, a meteorological firm, said more than 300 people across Japan had reported cherry blossoms were blooming in their neighbourhood, in a survey conducted last week.

Hiroyuki Wada, a tree doctor at the Flower Association of Japan, speculated that unusual weather patterns could be responsible for the blooms' surprise appearance.

He told public broadcaster NHK that violent storms had stripped trees of their leaves, which usually release a chemical that inhibits blooming before spring. 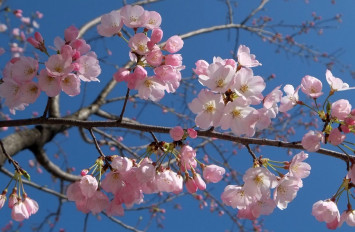 A series of unusually warm days after typhoons could also have confused the plants into flowering, he said.

"This has happened in the past, but I don't remember seeing something of this scale," he said.

Japan has been battered by a series of typhoons this year, including Jebi, which claimed 11 lives and shut down Kansai airport in September.

But Wada said the freak flowering should not affect the hugely popular cherry blossom season, which draws tourists from around the world and sees Japanese flock to hold "hanami" picnics in the shade of the blooms.

"The buds that opened now won't blossom in the coming spring. But only a small number of them are being observed. I don't think it will affect cherry blossom viewing (next year)," he told NHK.