A 12-year-old boy died in Hong Kong on Sunday (Feb 24), three days after choking on a beef ball.

The Secondary One student, identified by local media reports as Chau, was returning home from school in the Wong Tai Sin district at about 5pm last Friday when he stopped by an eatery to get snacks.

But as he was walking home to the Chuk Yuen South Estate, he took a bite on a beef ball and choked on it.

Hong Kong's English newspaper The Standard said that the boy was clutching his neck and gasping for air when he was spotted by a female security guard.

She called for an ambulance, which took him to the Caritas Medical Centre.

He was later transferred to the intensive care unit of Princess Margaret Hospital, where he died at 8.50am on Sunday.

According to Hong Kong tabloid newspaper Apply Daily, the boy had suffered from brain damage due to a lack of oxygen in his brain. This led to multiple organ failure.

The boy's teachers and classmates visited him at the hospital last Saturday and prayed for his recovery, but they had been told that the situation was not optimistic. 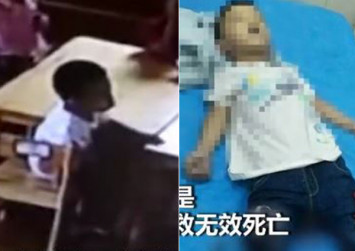 Speaking to The Standard, Hong Kong College of Emergency Medicine president Axel Siu reminded people that they should not eat while talking or walking.

"When people swallow too fast or eat while walking, food can drop into the airway," he said.

He added that those who see signs of choking, such as a person's face turning blue, should help by performing the Heimlich manoeuvre.

There have been other cases of children choking on food in recent months.

In August last year, a seven-year-old boy in Malaysia died after choking on the seed of a rambutan fruit.

And in March, a two-year-old Hong Kong girl died after choking on a grape at home.

#Food and Drinks #Children and Youth