A British woman received a six-month jail term in Indonesia on Wednesday for slapping an immigration officer after she blamed him for missing her flight.

Auj-e Taqaddas, 42, was found guilty in a court in Bali's capital, Denpasar, of violence against an officer at Ngurah Rai International Airport who was carrying out his legal duty, said Judge Esthar Oktavi.

A smartphone video of the purported incident, which went viral at the time, showed an agitated Taqaddas launching into an expletive-laden rant after she was told she would have to pay a fine of US$4,000 (S$5,400) for overstaying her visa by several months. She then struck him across the face after grappling to snatch her passport back from him.

The sentence was lighter than the one-year jail term sought by the prosecutor over the incident on July 28 last year.

This video shows the arrest in Lippo Kuta Mall in Denpasar, Bali, on Wednesday of UK national Auj-E Taqaddas, 43. A...

"We have been monitoring her movements in the past week and this afternoon we forcibly took her to the court," said prosecutor Waher Tulus Jaya Tarihoran. "She fought back, hitting and kicking our prosecutors." 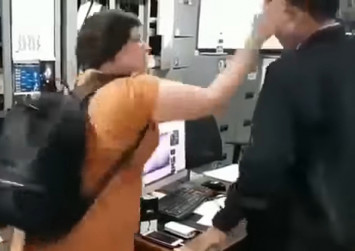 Taqaddas, who pleaded not guilty, called the ruling "an unfair decision".

"I was forcibly brought to the court, no lawyers provided," Taqaddas said in court, accusing the prosecutors of torturing her three times and trapping her in the country.

She said the video had been edited.

The judge and prosecutor said Taqaddas had filed an appeal.

The resort island is Indonesia's main tourism hub, attracting millions of foreign tourists a year to its beaches, temples and bars.

A small number of visitors run into trouble with the law every year, sometimes for breaking the Southeast Asian country's tough laws on drugs.