JAKARTA - Indonesian gravedigger Adang Saputra's heart breaks every time he hears the all-too-familiar prayers for the dead and the cries of distraught relatives as the coffin of a Covid-19 victim is lowered into the ground.

The 40-year-old hides his pain as he heaps moist red earth over the grave, plants a wooden headstone with the name of the deceased neatly written in marker pen in the ground, and offers a silent prayer.

Then, almost mechanically, he ambles towards an awaiting ambulance to help unload the next body for burial.

As a gravedigger for the Pondok Ranggon public cemetery in East Jakarta, one of two designated for Covid-19 victims in the Indonesian capital, Mr Adang has had to face the grim scene over and over, sometimes more than 30 times a day, for the past six months.

"In the beginning, I was scared. I was afraid of getting infected, as I knew nothing about Covid-19. I was worried, emotional, and there were a lot of bodies to be buried," he told The Straits Times from the cemetery, where some 3,000 graves lay.

"But I try to do my job calmly. I don't want to think about it too much and become stressed."

He is now up at the crack of dawn to get to work, rotating shifts among two dozen cemetery workers to bury the dead till as late as 10pm.

With bodies arriving at unpredictable times, sometimes two or three at once, he no longer goes home for lunch, instead scarfing down packets of rice with meat and vegetables and sipping coffee between burials. Gravediggers like Mr Adang are the unsung heroes working tirelessly behind the scenes as the pandemic continues to kill hundreds of thousands of people globally.

In Indonesia, the number of fatalities has passed 10,000 - the highest in South-east Asia - with more than 260,000 infections recorded.

There were 1,661 official deaths in Jakarta as at Friday (Sept 25), but many believe the actual number to be higher.

In the world's most populous Muslim country of 270 million people, funeral tradition dictates that bodies are washed from head to toe and a congregational prayer service performed before burial.

But with deaths due to Covid-19, bodies and coffins are wrapped in plastic and buried within 24 hours to minimise any risk of transmission. Families are barred from getting close to the coffins, though they are allowed to gather around the grave after the burial.

As they huddle in the distance, their grief - often mixed with shock - is unmistakable.

"Oh Allah, I'm so sad, my nephew is now an orphan," one relative was heard lamenting earlier this month. Another said the man who died had been fit enough to participate in a teleconference the previous night. A body being lowered into a grave as gravediggers watch on at the Pondok Ranggon public cemetery in East Jakarta. PHOTO: The Straits Times

The uncertainty and fear surrounding Covid-19 have sparked anxiety, and those on the front lines, such as healthcare workers and gravediggers like Mr Adang, have not been spared social stigma and discrimination.

Witnesses, however, attest to the care that is taken. Mr Faisal Latif Ahmad, a 27-year-old fireman who lives just 300m from the Pondok Ranggon cemetery, said the bodies are carefully wrapped in plastic before they are buried.

He said: "We don't need to be afraid as long as we wear a mask and maintain our distance."

Still, what others think matters little to Mr Adang, whose biggest concern is to keep his wife and grown-up son safe. 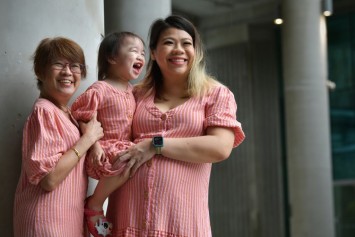 At the end of a work day, he removes his clothes and enters his house from a side door closest to the bathroom so he can quickly shower before he sees them.

He is careful to keep his loved ones at arm's length. He said he has slept separately from his wife since March.

"Sometimes, when I bury the Covid-19 victims, I can't imagine what will happen if the same thing were to befall my family," he said.

A strong sense of duty towards treating the dead with dignity is the reason he continues doing his job, even if it means having to don protective suits and stuffy masks, rain or shine.

Mr Adang believes there is a special place in heaven for lives claimed by the deadly virus.

"I know it's hard, but I hope the families will be able to let their loved ones go, with sincere hearts," he said.

"I hope the deceased will be accepted by God and die as martyrs.

"God willing, they will be martyrs," he added.