Cambodian Prime Minister Hun Sen speaks during a meeting with Chinese Premier Li Keqiang (unseen) at the Great Hall of the People in Beijing, China, on Jan 22, 2019.

PHNOM PENH - Cambodian Prime Minister Hun Sen has pledged renewed support for a Myanmar peace plan and urged an end to violence ahead of a trip to the country that will include talks with military leaders.

His visit from Friday (Jan 7) will be the first by a head of government to Myanmar since the army overthrew the elected government of Aung San Suu Kyi on Feb 1 last year, sparking months of protests and a bloody crackdown.

Cambodia is current chair of the Association of Southeast Asian Nations, which has been leading diplomatic efforts to resolve the crisis and which adopted a five-point "consensus" peace plan in April.

Some other Asean countries including Indonesia have expressed frustration at the junta's failure to implement the peace deal. In Myanmar, opponents of the military rulers have said Hun Sen is backing them by making the trip.

In a speech on Wednesday, Hun Sen called for restraint from all sides in Myanmar and for the peace plan to be followed through.

"Brothers in Myanmar, do you want your country to fall into a real civil war or want it solved?" he said. "The first point of the consensus is the patience, the cessation of violence. This is the goal that we want." 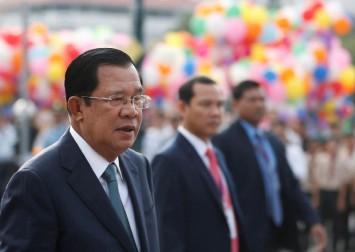 After a phone call this week with Hun Sen, Indonesian President Joko Widodo said in messages on Twitter if there was no significant progress in the peace plan only non-political representatives from Myanmar should be allowed at Asean meetings

The Cambodian foreign ministry said Hun Sen will meet military leader Min Aung Hlaing, but made no reference about meeting Suu Kyi, who is on trial and faces nearly a dozen cases that carry a combined maximum sentences of more than 100 years in prison.