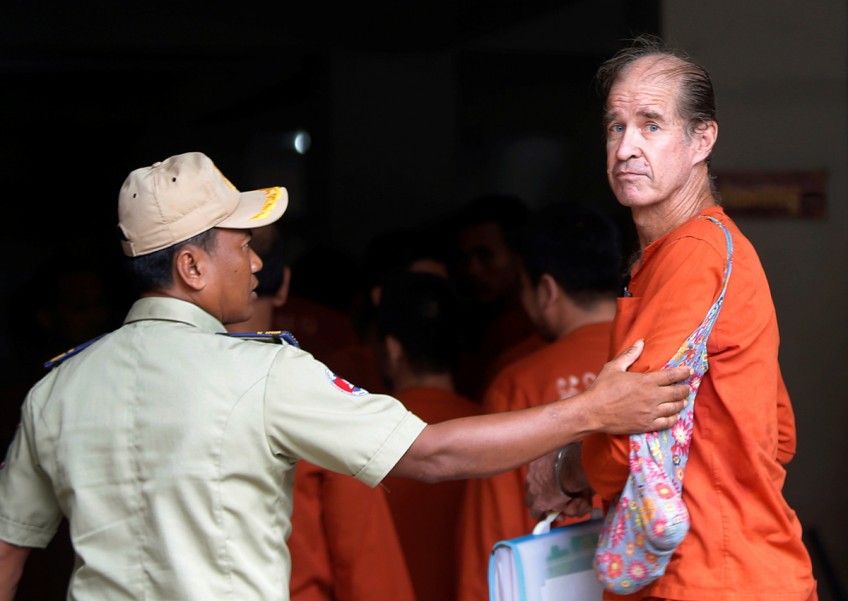 PHNOM PENH - A Cambodian court jailed an Australian filmmaker for six years on Friday after finding him guilty of espionage for flying a drone over an opposition party rally.

James Ricketson, 69, was arrested last June after he was photographed flying the drone above the rally organised by the now-dissolved opposition Cambodia National Rescue Party (CNRP) before communal elections.

Ricketson was charged with espionage, although it remains unclear for whom he was spying. His family called the court sentence an "absolute tragedy".

"The Phnom Penh Municipal Court has decided to convict James Ricketson and sentences him to six years in prison for espionage and collecting information that is harmful to the nation between December 2010 and June 2017," Judge Seng Leang said.

Ricketson, who has spent more than a year behind bars after his bail was denied, appeared in court wearing a pink prison uniform and holding a copy of the thriller book 'The Faithful Spy' by Alex Berenson.

Speaking in court after the verdict, Ricketson expressed disbelief. "Which country was I conducting espionage for?" he asked.

"James is almost 70 and is not in good health, our family is very scared about what will happen to him in there if things take a turn for the worst," Ricketson's family said in a statement following the verdict, referring to Phnom Penh's Prey Sar prison where Ricketson has been jailed.

"James is not a spy. James loves Cambodia and the Cambodian people. He is a filmmaker and a humanitarian," the family said.

During hearings that began last week the prosecution argued that Ricketson's work had damaged Cambodia's reputation on the world stage.

Ricketson has been visiting Cambodia for more than 20 years, producing documentaries about the country and its people.

"It's very difficult to imagine what the future holds now for my dad. I'm absolutely terrified for him," he added.

Australia's Prime Minister Scott Morrison said that Ricketson can expect further consular assistance and that the government had previously approached Cambodia directly about the case.

"As usual with these types of events, it's best I think to deal with these things calmly, directly and in a way that best assists the citizen," he told reporters in Jakarta.

In a letter to Cambodia's long-serving Prime Minister Hun Sen last month, Ricketson apologised for statements to media that were disrespectful to Hun Sen.

Ricketson's arrest came amid a wider crackdown on freedom of expression by Hun Sen's government and his Cambodian People's Party (CPP).

Rights groups said the July 29 vote was neither free nor fair given the absence of a significant challenger to Hun Sen, who has ruled for 33 years.

"This trial exposed everything that's wrong with the Cambodian judicial system: ridiculously excessive charges, prosecutors with little or no evidence, and judges carrying out political orders from the government rather than ruling based on what happens in court," Robertson said in a statement.