The unusually candid pictures of King Maha Vajiralongkorn's consort, 34-year-old Major-General Sineenat Wongvajirapakdi, were released along with her official biography.

BANGKOK - Thailand's palace website crashed on Monday (Aug 26) after it released unprecedented pictures of the king's consort in a fighter jet, wearing a crop top and dressed in combat fatigues with him and the royal poodle.

The unusually candid pictures of King Maha Vajiralongkorn's consort, 34-year-old Major-General Sineenat Wongvajirapakdi, were released along with her official biography.

A palace official said the website was being fixed because of the volume of traffic. The palace has a policy of not commenting to media.

The king named Sineenat, a former nurse and his bodyguard, as Royal Noble Consort on his birthday last month. It was the first such appointment in almost a century, long before the end of absolute monarchy in 1932. 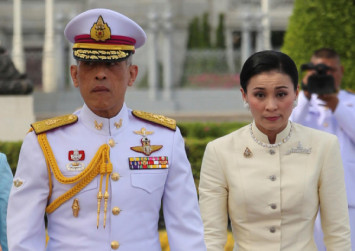 Some of the pictures are in the usual royal tradition, with Sineenat wearing Thai dress and sitting at the king's feet.

But she is also pictured in the cockpit of a fighter jet and wearing a grey camouflage pattern crop-top at the controls of a light aircraft. Some pictures show Sineenat and the king holding hands while one shows them both in green combat fatigues with the royal pet dog.

Sineenat's appointment as consort came after the king married a former flight attendant and deputy head of his personal guard force, Suthida Tidjai, 41, and made her queen just days before his coronation in May.