Indian activists from various Assamese rights groups celebrate the failure of a contentious nationality law in the national Parliament, in Guwahati, India, on Feb 14, 2019.

The proposed changes to the 1955 Citizenship Act would have given Indian nationality to Hindus and other minorities emigrating from Afghanistan, Bangladesh and Pakistan.

The legislation - passed by the Lower House of Parliament in January - sparked angry protests in India's north-east, long riven by tensions between local tribal and indigenous groups, and settlers from outside.

Mr Modi's ruling alliance failed to present the Bill in the Upper House, which adjourned on Wednesday (Feb 13) after its final session before a general election due by May.

Local media reported that celebrations broke out in some half a dozen north-eastern states after it became clear the Bill would not be passed. 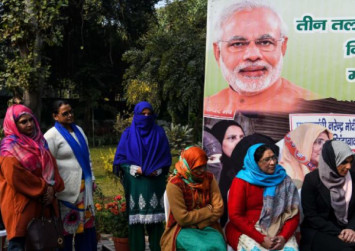 "It is a historic victory for the people of north-east (India). The people of the seven states in the region stood together in opposing the Bill, forcing the country's ruling party to give in," Mr Samujjal Bhattacharyya from the powerful All Assam Students' Union told AFP.

"We are very firm in our opposition and are going to oppose the Bill if the BJP government comes to power" in the future, he added.

The region has been plagued by decades of tensions between local tribal and indigenous groups and settlers from outside, including many Muslims and Hindus from nearby Bangladesh.

While some groups there want to block all outsiders, human rights activists also condemned Mr Modi's Hindu nationalist government for excluding Muslims in the proposed legislation.

They say it will be the first time religion has been a criteria for nationality in India, which is officially secular.