A man paints a solar street lamp in the suburbs of Pyongyang, North Korea May 4, 2016.

SEOUL - Years after they first appeared in North Korea, increasingly cheap and available solar panels are giving a boost to consumer consumption and industry as Pyongyang tries to limit the impact of tough international sanctions.

Electricity shortages have been a perennial concern for North Korea, and leader Kim Jong Un has called for greater use of renewable energy as part of his drive for self-sufficiency as sanctions have ratcheted higher in response to the country's nuclear and missile programs.

Among the hottest selling items are water purifiers, hair straighteners and electric bicycles, mostly from China but some made in North Korea or even smuggled in from South Korea.

"A few years ago, such things as water purifiers, mixers and rice cookers were only seen at some restaurants and rich households, but they are becoming commonplace, especially in cities," said Kang Mi-jin, an economic expert who regularly speaks with North Koreans for Daily NK, a website run by defectors.

"Some would look just like an ordinary middle-class South Korean home, with a wall-hanging LED TV, multiple laptops and electric mini cars for babies."

North Koreans started using solar panels several years ago, mostly to charge mobile phones and light their homes as a backup to the unstable, mostly hydro and coal-fired national grid.

As well as markets brimming with electronics products, there are more teahouses, computer games rooms, karaoke bars and billiard halls open longer after switching to solar from diesel generators, according to recent visitors and defectors.

Such entertainment venues are becoming more widespread, not only in cities, but also the countryside, where grid power is even less reliable.

"At night, often it is only those places that have solar panels and batteries that have lights on," a source with knowledge of the issue told Reuters on condition of anonymity due to the sensitivity of North Korea affairs.

Use of the panels spread after they were used at a now-closed inter-Korean factory park in the North's border city of Kaesong that opened in 2004.

"Now many apartment balconies have them out in the sun during the day collecting energy so they are readily visible, the source said.

Private use of solar panels has gone from being officially banned, to tolerated, to encouraged by the ruling Workers' Party, which keeps a tight rein on the economy and the populace.

Early this month, the official Rodong Sinmun ran an article about a team of laborers at a cooperative farm who earned solar panels and LED TVs as a reward from the Party for surpassing a production goal.

State television has also aired a series of reports on the growing use of solar energy over the past year, including a 17-minute documentary from October introducing locally made devices, such as high-voltage inverters and even a portable charger for electric bicycles.

Kim Yun-soung, a research fellow at the Green Energy Strategy Institute in Seoul, said the North's push for domestic production of solar equipment was spurred by sanctions banning imports of metal products.

"Electricity was the biggest problem but we achieved such a highly advanced, cutting-edge technology ourselves from scratch, which was once monopolised by developed nations," the film's narrator said, referring to the inverters.

State media has listed the central bank, schools, factories, and even ferries as entirely powered by solar panels.

"A solar panel gives you 'free' power once it is installed," said Kim Young Hui, a defector and an economist at the South's state-run Korea Development Bank.

"So the nature of the panels perfectly fits Kim Jong Un's mantra of self-reliance - or in other words, creating something out of nothing."

Most of the panels sold in markets were brought in from China, and prices have dropped by up to 40 per cent over the last few years amid a global glut and rising North Korean production, defectors and experts said. 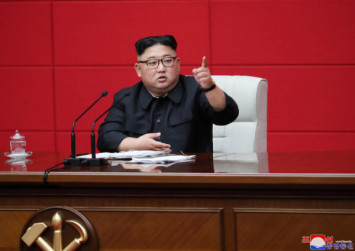 Pyongyang does not provide data on its use of solar power, but Kang said about 55 per cent of North Korean households are equipped with the panels. The ratio is higher in Pyongyang and other cities, as well as border regions where Chinese goods are widely available, she said.

David von Hippel, an Oregon-based senior associate at the Nautilus Institute, a US think tank, said North Korea has imported a total of 29 megawatts of solar panels from China through 2017, citing Beijing's custom data.

Experts say solar energy still account for less than 0.1 per cent of the country's generation capacity, estimated by South Korea's statistics agency at some 7,700 megawatts as of 2017.

Pyongyang aims to boost its renewable capacity to 5,000 megawatts by 2044, with a focus on wind power, according to state media.

Panels play a key role in soothing public discontent toward the Kim regime over chronic power shortages and sanctions, defectors and observers say.

"Kim Jong Un appears to be committed to economic reform," von Hippel said. "So the increased access to energy in some ways relieves the government from having to supply its citizens with energy."